Wait for the curtains to go up for a review of songs for the particular year @ Songs of Yore is more than an eager wait. It is preganat with more unknown songs now.  Having covered songs of 1955, 1953, 1951, 1950 and 1949 in the previous years, SoY has now crossed the threshold well into the Vintage Era as it now ventures into ‘Best songs of 1948: And the winners are?’ 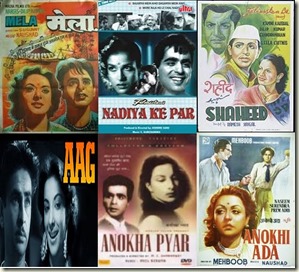 As noted in the overview turnkey article, we now enter the period which has two quite distinct characteristics:

One, Lata Mangeshkar did sing over 40 songs of which you can count about ten memorable and a couple of all-time great songs, yet she was not the sole pole star, as she became from 1949 onwards. Therefore, dividing the female playback singers as Lata Mangehkar and ‘others’ as (has been) done for 1949, 1950 and 1951 would not be a true reflection of reality.

Secondly, the Vintage Era also means entering a period of more unknown than known, therefore, the year-wise review would now be more a discovery trip.

The post under consideration – Best songs of 1948: And the winners are?  – has presented quite an  encompassing overview in an established template: –

Musical landmarks: Like a golden Jubilee (Mela) and a silver Jubileen (Anokhi Ada) under the belt Naushad hasestablished his morchical position. His nearest rival C ramchandra has Nadiya Ke Paar and Kidkiin the year under review. Ghulam Hiader has presened his swan song on now the Indian soil – Shaheed. Raj Kapoor directs his maiden film Aag with Ram Ganguly as music director. Lata Mangeshkar has hardly any presence in these films.

Other important musical compositions are no less noteworthy nor have lost their charm. We will enlist them here –

Snehal Bhatkar – as a music director in Suhaag Raat

Bharat Bhushna and Geeta Bali – as actors in Suhag Raat

Fact file and Trivia notes that five songs of Meena Kapoor for Anokha Pyar were recorded on Lata Mangeshkar; Leela Chitnis played mother for first time in Shaheed; Mohammad Rafi holds a falg pole in Watan Ki Rah Mein Watan Naujawan Shaheed Ho; Ameerbai Karnataki composed music for Shahnaz, once only in her career; Vidya Nath Seth sang firve songs for Rooplelka of which he composed one song too.

List Of Memorable Songs is a fairly representative list of films, music directors and known as well as less-known songs that were released in the year. I have re-compiled this list, under the title Memorable Songs of 1948, by adding the relevant link to YT file.

For the year under review, Special songs also cover the songs which open a path of discovery on their own well as they have thir own personality. In this case too, I have brought these songs on the same page with List of Memorable Songs of 1948.

The stage is now set to commence our journey into the Micro View of the Songs of 1948. As the List of Memorable Songs and Special Songs have covered most of the well-known songs for the year, we will restrict our micro-view to in-depth listening of not-so-well-known songs. We will then combine our impressions of these songs with that we already have for the well-known ones to present our point of view in so far as

All the posts that will appear on this subject here have been tagged as Songs of 1948 @ SoY.