Shailendra and “Other” Music Directors

Shankardas Kesarilal , born on 30 August 1923, popularly known to all of us Shailendra ,passed away by living a Chhoti Si Yeh Zindagani, like a comet that lit the sky while it lasted, at (just) the age of 43 on 14 December 1966.

Most of the songs that Shailendra wrote under the batons of Shanker Jaikishan or Salil Chaudhary or S D Burman have already been immortal. In a career[i], spanning around 800 released songs for Hindi films, Shailendra had had opportunity to work with several ‘other’ (than these three) music directors as well. Most of these songs also have been equally live in our memory today. 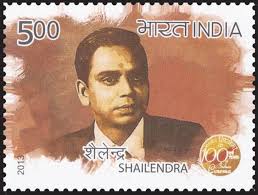 We will dedicate our August, 2017 episode to Shailendra’s songs with the ‘other’ directors. For this episode, special care has been exercised to cover to select chronologically first film with that music director while casting the net wide enough to cover as broad spectrum of singers as is possible. Also, I have intentionally chosen songs that I have either not heard or those that need a refresher push.

The first set of these songs, coincidentally, have Geeta Dutt as (one of) the singer.Geeta Dutt had hardly any occasion to sing Shanker Jiakishan songs. By the time Shailendra teamed up with S D Burman, S D Burman had switched over to Lata Maageshkar. So is the case with Salil Chudhary’s songs too. Therefore, this has turned out to be good incidence where we can hear Shailendra’s songs in Geeta Dutt’s voice.

The song apparently is meant to divert the chasing British police, but has an apparent message for the inadvertent hurricane the freedom fight is likely unleash. Geeta Bali sings with gay abandon that may also mean the upsurge from the young hearts.

The song is an ideal fit with our image of silken smoothness of Geeta Dutt’s voice.

This is a dance song that seeks to hoodwink the listeners so as to cover the acts of the partner in the deed. So the lyricist has to not only pack in a meaningful, mind-catching message for the lay listeners and but also has to convey an intended message to the target partner.

The film had 4 songs penned Majarooh Sultanpuri, 1 by Madhukar Rajashathani and 2 by Hasrat Jaipuri . All songs are in Geet Dutt’s voice, except one which had Laxmi Roy.

We now move on to songs that have other playback singers.

This song adds genre of patriotic songs in the Shailendra’s arsenal.

The other film where Shailendra teamed up with C Ramchandra is Anrakali (1953), which has such immortal songs as Aaja Ab To Aaja Mer Kismat Ke  Kharidar and Dua Kar Gham E Dil Khuda Se Dua Kar.

Each is piece of the song – singers, music directors – except Shailendra is quite rare.

Down the career, Shailendra has given several meaningful twin songs. Here is the one early one.

Here is the song that has the basic flavor of a very rustic setting that is presented with in its natural simplest form.

Shailendra has teamed up with S N Tripathi for more than one film – like mythological Ram Hanuman Yudh (1957) or Shiv Parvati (1962) to a period film Sangeet Samtrat Tansen (1962) to a social film Kunwari (1966).

This is one more example of Shailendra’s comfort in dealing with unusual situations. Here is the song that is a traditional dance song attributed to street-performances of a monkey trainer with his pet monkey. Compare this song with another song of the film, a Kishore- Asha duet – Ye Raatein Yeh Mausam Nadi Ka Kinara.

The lead protagonists become young children in the company of the children and so does Shailendra.

Shailendra deftly uses a traditional street performance to deliver a strong philosophical message. I am not sure that singer of the song, Shailesh Mukherjee, is the same person as music director Shailesh Mukherjee.

The film had 5 more songs – 4 by Raja Mahendi Ali Khan and one by Sahir Ludhyanvi. So, obviously Shailendra has been allotted this situation wherein the child artistes perform the song on the screen. The song had been quite popular.

In an otherwise an experimental social film, the songs filmed on the heroine, Anuradha (lela Naidu) help strongly develop the characterization of the role. Here is a song that is coposed on a fairly difficult Carnataki Classical Raag – Jansammohini, also known as Shiv Kalyan or Madh Kalyan.

The piece that is considered to have inspired the song is  Ganpat Vighanharan  :

KaanchKi Gudiya invaribaly would conjure a Mukesh and Asha Bhosle duet – Saath Ho Tum Raat Jawan. However, the song that we have selected presents a very different Asha Bhosle to us.

Their next association is 1965’s Chhoti Chhoti Batein.

The obvious reason for picking this song for the present episode is it has Mahendra Kapoor. In the process, we also get the benefit of listening to a very light-hearted song from Shailendra.

As we know well, Dattaram was one of the very important links on the Shankar Jaikishan team. The song has very prominent us of what was popularly known as Dattu Theka – a typical stroke that Dattaram would invariably conjure up in his the accompanying base instrumentation.

I have lined up songs that have Mohammad Rafi in the end of the episode. Incidentally each one represents a very different point of a spectrum of Shailendra’s vast repertoire

This is the only song that Shailendra has penned for the film. Hasrat Jaipuri and Indeevar had two songs each, whereas Gulshan Bawra had 3 songs. This also gives us one more of a Johnny Walker song to accompany one of the most illustrious one – Jangal Mein Mor Nacha Kisi Ne Na Dekha

As the name of the films suggests, the film essentially would be based on the Patriotism theme. Therefore, it is not quite surprising to see Shailendra being easily able to handle the songs that befit the theme.

Here is the song that depicts the mental state of a grown-up prince.

Illahi Tu Sun Le Hamali Duva, Hame Sirf Ek Asara Hai Tera. Teri Rahamate Rah Roshan Kare, Salamat Rahe Saya Man-bap Ka – Chhote Nawab (1961):- Mohammad Rafi – R D Burman  The song was the game changer in the film. In his maiden venture, RDB, on one hand succeeds in  providing just the right platform to Mohammad Rafi to fully express the emotions of the song and on the other hand has lived up to the challenge of the Shailendra’s very poignant lyrics.

When we look back now, we see one most glaring association missing at the core career path years of Shailendra – with Madan Mohan. Similarly, if we see the presence of R D Burman from the (so-called) next generation of music directors, one may note absence of Laxmikant Pyarelal.