Welcome to November, 2017 edition of Carnival of Blogs on Golden Era of Hindi Film Music.

November, 2017 – month of a century+10 birth day of Prthviraj Kapoor and passing away of a noted thumri and khayal exponent Girija Devi.

No Singer Like Girija Devi Will Ever Be Born: Pandit Jasraj

The Depth of Girija Devi’s Fluid Notes Will Continue to Anchor the Memory of Banaras by Navina Jafa – The energy that buoyed Girija Devi’s creativity as well as her magical execution of thumri and khayal emerged out of the mehfils.

We will now take up tribute posts:

Shyama, the Impish Girl in the Dungarees, Is No More – Karan Bali 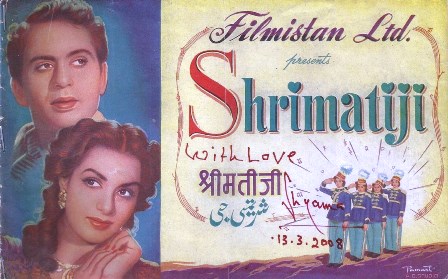 There was magic whenever Geeta Dutt lent her voice for Shyama. This vibrant singer and exuberant actress complemented each other perfectly through several films like Shrimatiji.

‘Who’s Chitragupta?’ Only the Hindi film music composer of numerous forgotten gems – Rudradeep Bhattacharjee – A reassessment of the composer, whose birth centenary falls on November 16, is long overdue.

[N.B.: I have picked up a two random, less heard, Mohammad Rafi songs, at the end of our present episode.]

Chitragupt- A Tribute also has picked a few rare songs:

The Uncommon Roshan – What sets legendary composer Roshan apart from his peers? What – if any – is the hallmark of his compositions? What makes him so different and so intriguing? Monica Kar takes a look.

Actor, producer, novelist and raconteur: Archival documentary reveals Prem Nath’s many roles : ‘Amar Prem Nath- Last of the Titans’ has been directed by his son, Monty Nath, and is being screened on Zee Classic…… Kalicharan (1976) contains a meta-moment: as the characters played by Prem Nath and Ajit play a game of chess, a police officer’s portrait hangs in the background. The figure in the painting is Prem Nath’s father.

Remembering AMJAD KHAN on his 77th Birth Anniversary through his iconic dialogues.

The November 2017 episode of Fading Memories, Unforgettable Songs was dedicated to Salil Chowdhury’s Hindi Film Songs in Other Languages.

Here are posts on other subjects as well:

Percussion Discoveries: Kathak Bols Can Be Great Just for Listening, and I Have Finally Found a Queen of the Dholak! – The path of discovery takes us from LP recording of SItara Devi to 1951 film Dholak’s song Mausam Aya Hai Rangeen, in which dholak is being played all female cast (on the screen). The hunt for a real female dholak player does not find any result from India or Pakistan or the UK or the U.S.A. It lands up at some place closer to the countries in the Western hemisphere that obviously influenced the Latin-flavored jazz within that song from the film Dholak. Her name is Chantal (referred to at different times, I see, as Chantal Mangal or Chantal Khaderoe), and she is from the Caribbean – specifically, Suriname. She is seen performing @ Sarnami khana pakana and a live Baithak Gana. YT search leads to a couple of more performances – here and here.

Bol Ri Kathputli: Personifying the Puppet Perfectly – Among the memorable dances picturised in Hindi films, Bol Ri Kathputli from Kathputli (1957) is an innovation in terms of choreography and music. Anand Desai and Antara Nanda Mondal explore the finer nuances of this exuberant story of the puppet personified by Vyjayanthimala, written by Shailendra, composed by Shankar Jaikishan and sung by Lata Mangeshkar.

Merchant Ivory classic ‘Shakespeare Wallah’ restored, to have limited re-release along with 29 other Merchant-Ivory productions.

And They Made Classics – Director-Writer Duo of Bimal Roy and Nabendu Ghosh – Antara Nanda Mondal – Directed by Ratnottama Sengupta, And They Made Classics goes behind-the-scenes through an interview with Nabendu Ghosh that was taken in 2005 where he talks about his association with Bimal Roy. The film explores behind the scenes stories about the casting, the arguments, the reactions, the way they worked, along with clips, stills, documents.

The Story of Babul mora naihar chhooto hi jaye-The Queen of Thomris is historical narrative of The Famous thoomari, with video clips of different versions.

RD Burman and His Lyricists – Peeyush Sharma and Antara Nanda Mondal take us through a journey of discovering and enjoying gold nuggets of RD Burman’s music created with some of the most prolific lyricists he worked with.

‘Aaj Phir Jeene Ki Tamanna Hai’ from ‘Guide’ is an ode to life – In Vijay Anand’s 1965 film, Waheeda Rehman finally let rips after a lifetime of sorrow and neglect.

My Favourite ‘EYE’ Songs lists songs that describe a certain quality of the eyes, it can be romantic, naughty, sad, quiet, magical, frightened or just beautiful! 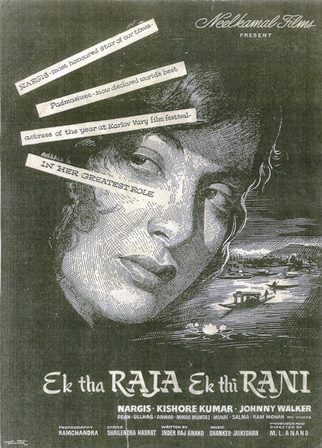 Ek Tha Raja Ek Thi Rani saw Nargis paired opposite Kishore Kumar for the first time, a most unusual pairing. The film, written by Inder Raj Anand, had them both in double roles, in a tale of mistaken identities

Controversy in Bollywood Films  discusses some of those Bollywood films which made controversy at the time of their release.

Is that really a lesbian moment in ‘Khwab Bankar Koi Aayega’ from ‘Razia Sultan’? – Kamal Amrohi’s historical is chiefly remembered for its soundtrack, which includes a daring clinch between Hema Malini and Parveen Babi

There is Always a Story Behind a Great Song bring forward some of these interested inside stories to the readers.

In our series Micro View of Best Songs 1948 @SoY of Best songs of 1948: And the winners are?, we continued with the posts on Female Solo Songs. Having heard Suraiya, Geeta Dutt, Shamshad Begum and Raajkumari, we explored solos songs of Surnder Kaur, Other Female Singers and the 1st of 3 parts of Lata Mangeshkar solos.

We will begin the end of the present post with a post on The 11 Emotions of Mohammad Rafi which has presented Mohammad Rafi’s ‘ability to express the emotions which make up different slices of life across 11 different Ras (emotions).

We will also listen to two of the great but receded-from-the-memory-songs of Chitragupt:

I trust you will always feel free to proffer your suggestions for making this series of posts more lively and informative….