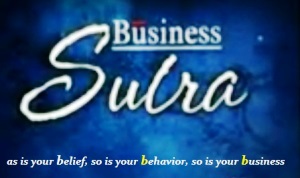 The 1st episode presented to us the most visible form of the business – the corporation: its meaning, its purpose and its action perspective. In the 2nd episode Devdutt Pattanaik discusses Leadership: Role of the leader, Context of the leader and Leadership in different business cycles. The 3rd episode relates to the Business Ethics and Morals:  business ethics and dilemmas, relationship between owner and the organization  and The Right (Dharma) – the Ramayana way and the Mahabharata way. The 4th episode deals with Conflicts, of the Board and the CEO and that of the means vs. ends. The 5th episode takes unto the realm of Education, wherein Part 1 covered the basics of education to the (potential) leaders in Ram’s Education, Part 2 addressed the Knowledge Transfer to Next Gen and Part 3 dealt with the issue of student motivation.  The 6th episode has taken up the oft-discussed topic of ‘measurement’, wherein in the Part 1, What Can Be Measured, dealt with the definitive need for not ‘only measurement’, but for ‘also measurement’ too and Part 2 dealt with mutual importance and dependence of Objectives versus Subjective Reality, whereas Part 3 evaluates ‘What is Your Worth?’ from these measurements perspectives .

The 1st segment – Nature is destroyed when culture is created – of 7th episode took up the inverse relationship Environment with human development.

Armed with huge amount of ‘knowledge’ and the advances in the technology, Humans started expanding the limits of its direct and indirect interaction with the Nature. On many occasions the human being scored an upper hand, at least for the time being. That prompted him to build a tendency to think that we can (always!) outsmart the natural world. But, nature has a funny way of telling us – or rather showing us – that we’re not as clever as we might think. ‘This Is What it Looks Like When Nature Fights Back Against Civilization (and Wins!)’ has backed up this argument with some very convincing photographs. Here are a few of them –

Nature not only finds such ways to live with the growth of mankind, it also chips into undo the damage, to whatever best it can, as put forth in  ‘Mother Nature Fights Back Against Climate Change’. In this article,  Jenna Iacurci states that ‘humanity may be struggling to find ways of reducing carbon emissions, but it seems we are not doing it alone, as Mother Nature is also fighting back in her own way against climate change.’

If none of these two routes work, Bill McGuire says we can also expect more earthquakes, volcanoes, landslides and tsunamis, when the Earth Fights Back. It may be no coincidence that one outcome of increased volcanic activity is likely to be a period of falling temperatures, as a veil of volcanic dust and gas reduces the amount of solar radiation reaching the surface. Maybe the Earth is trying to tell us something. It really would be worth listening before it is too late.

Hauschka performs “Nature Fights Back” from his album “What If” live at Funkhaus Berlin to spread the awareness of the subject.

Devdutt Pattnaik has used the term Pralaya – Annihilation of the universe- from the Hindu mythology, to put the nature’s extreme response in its correct perspective. For more detailed analysis, we will move on to Segment 2 of the episode 7 wherein Devdutt Pattanaik takes up the subject of The Environment Strikes Back.

I understand that conflict is part of creating culture and that it is embedded in culture. But the question that it leaves us with, and the question we are grappling with today, is how much is too much. We are all seeing the consequences of over-exploiting the environment or taking away from nature. It is ironic because we are not the perpetrators of this crime and yet we’re paying for it.  So how much is too much and why can’t the consequences of actions be more immediate and therefore previous generations would have paid for the kind of damage that they did to the environment as opposed to us having to pay?

What do we mean by long sight? Every action that we do is having repercussions over generations. But if my focus is on this quarter’s profit then I really don’t care for the long-term implications of my actions.  I am so focused on the short term that I have forgotten the long term. Now what happens at a very selfish level is that that I don’t have to pay the price, I am the CEO, I make my money and I move on. The next CEO will suffer the consequences of my actions.

But as we talk about a shrinking global village, everything is in your backyard. You will now pay the price for it because the same technology that enabled it to shrink is now going to get the Serpents back.

You said that Krishna gave his sanction for the burning down of the forest in order to create a city. Is it how do you create a city. It brings me back to the question that I asked you how much is too much. How many forests can you burn down to continuously create cities? I almost know the answer to that and understand that there has to be a balance between development and the environment. But is there any prescribed method that helps to know how much is too much.

Let’s see it in the form of story – Remember Vishnu’s first incarnation was that of a fish. That is how we began the story of how organizations are created and how cultures grow. The fish is in a pot and as the fish keeps growing the pot keeps growing bigger to accommodate. The story is very interesting after that because it starts getting blurry.

thing that we hear that is the Pralay, a doomsday. What happens is that the fish has grown so big that even the sea is not enough to accommodate it. So the rains have to come to fill the sea and then to even to expand the sea so that it can accommodate the growing fish. As the sea starts to expand, it starts creeping over the land, the land gets flooded and Manu whose land starts to get flooded, runs to the top of the mountain.

When he reaches on the top, Manu wonders as to what is happening, what has gone wrong, even when he has been very kind and gentle? He has tried to give the fish more and more resources. But, at no point did he ask that why can’t the fish be content with the water in the pot, why does it constantly want more and more.

What is being reined in is that the nature’s resources are finite but human desire is infinite. What was never asked is at a particular point that the small fish has become a big fish, so why can it not fend for itself?  That Manu did not think. So his own the compassion, which created the pot, when was taken to an extreme becomes his own destruction. He becomes so compassionate that he forgets to see that the fish needs to be content enough and ought to have to fend for itself.

That is when need becomes the greed and then the line between need and greed starts to blur. We don’t talk about this greed. We talk about moral bankruptcy of corporations. It is not that the corporations only are not morally bankrupt, it is also the shareholder too, who keeps demanding more and more in every quarter. It is the customer too, who says that, listen, I do care for the environment but I’m not going to give up my car. I will not give up my car, but why should the third world countries need cars; they should be happy with bullock carts. This an inherent conflict – I want profit, but I also want my nature to be secure.

It can’t work. Something has to be given up. So if you are not willing to give up your infinite desire then the finite nature will take over and the pralay will happen. What is the worst that will happen? Fifty percent of the human population may perish. Nature will always prevail upon in the end.

So the end is script in our scripture is the destruction.

The first story of Vishnu Purana talks about the creation of organization as well as the destruction of an organization. To balance it, the word given is Dharma. As we have repeatedly talked, Dharma is about look at the other side. There is no such thing as  ‘it not my backyard’, everything is your backyard. That shift will happen when Dharma will happen, when I realize that where from comes the problem- whether it is an oil spill or Naxalites fighting. They are coming from some activity that I am doing. This is my karma, my actions that are leading to this reaction. Do I take responsibility for it or leave them as devil’s work? It is about taking responsibility for creating the mess that we have done. The only way to handle it is not by punishing the serpent, it is by taking responsibility for an infinite greed.

So is there any sort of P.S. in the book that tells you what happens after the pralay?

Rebirth happens; the new organizations are created and the new world order starts and hopefully a second chance is given. Even if you fail again, the same thing will happen again and again.

You cannot fight greed with logic. Greed is illogical! You are saying; give me a logical reason to combat something as illogical as greed. Greed is rooted in deep-seated human fear. The fear is illogical. So saying that give me logic, a mathematical template, to deal with greedy people would not just work. It does not work, it will not work.

The episode quite emphatically states that nature will strike back with all its vengeance to those who do rein in their greed of satisfying their infinite wants. No logic will ever cure who are guided by such sheer greed. Whether the mankind will learn from the devastating responses of the nature? Will it build the new world by learning from its past misdeeds? The episode has a clear message – if it does not, then The END is foretold. The only question is How and When?

In our continuing journey of Devdutt Pattanaik’s TV serial Business Sutra, we will move on to the 8th episode – The Family Feuds, in our next episode.