Shankardas Kesarilal, born on 30 August 1923, popularly known as Shailendra, was known to conjure up songs on a spark after waiting for days on end to write the first line. These songs were always full of meaning, sentiments and yet were never too difficult to comprehend. 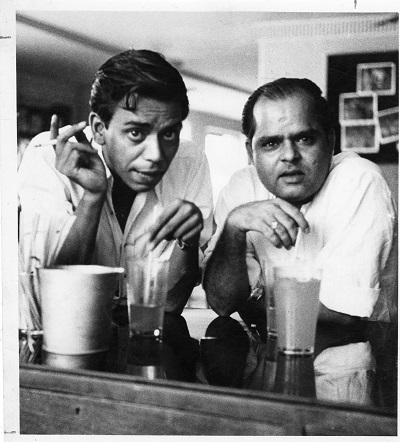 We pay our tribute to these two most cherished names of HFM today, by recalling their less remembered songs. These songs belong to a period when Shailendra had just attained the fame, but Roshan was still in the process of carving out a space for himself.

It may not therefore be a matter of sheer (commercial) chance that films for which Shailendra wrote songs to Roshan’s compositions number just after Shanker Jaikishan, S D Burman and Salil Chaudhary.

Last year, in our article in the present series, we had a Roshan – Shailendra song  Mere Dil Ki Dhadkhan Kya Bole [Anhonee (1952); Talat Mahmod, Lata Mangeshkar]. We take over our journey of Roshan+Shailendra songs from that point of their co-work. For our present article, I have chosen those songs for which I could not recollect the song by just reading the initial words of the song. I have also tried to include as many playback singers as possible while applying the first filter.

The song has been placed in the film to convey the real negative feeling which the protagonist (Kuldeep Kaur) had when she was presented to meet a very bright, but a blind, son of a rich man. The song has been set to a mujra dance, which has all the external forms of a very expressive art, but socially carries a negative connotation.

We have only an audio clip available here.

The song gives a call to the people to unitedly fight the poverty and usher in the poverty. The lyrics of the song have been closely aligned with the work of log cutting being carried out by teams of the workers.

This is lullaby duet, which is a rather uncommon format for the genre. The song has interwoven the touch of pathos about the ways of the world.

This song belongs to letter (‘chitthi’) genre of songs. The song has an ebullient, very young, pre-tragedy queen Meena Kumari in the process of writing down her thousands of tales (‘bayaan’) through one pen….

This is the only song written by Shailendra for this film. In fact Hasrat Jaipuri has written one more and all other were written by Prem Dhawan

The vivacious Geeta Bali is her at effervescent best, well-supported by rollicking lyrics composed to a very unorthodox tune..

Shailendra translates the dream of the adolescent girl of realizing a day that would be her own. Roshan has finely woven the cautious optimism in the composition of the song.

The song is lady’s promise to be a fully-involved co-traveler on the roads of the life. Why Shailendra would have chosen a mundane metaphor of a judge’s pen delivering a judgement for so sentimental a commitment being conveyed remains unfathomed.

The song brings in the essential philosophy of moving on among all the negative circumstances. The song has used metaphor of the servants of the home baby-sitting the toddler who then goes up into a young boy.

When we look back these ’pieces’ of choices of the song, we see a totally new Roshan emerging from the lyrics of Shailendra.  The pattern obviously not conducive to being commercially successful, but nonetheless provides a fine insight into the deep creativity of both, Roshan as well as Shailendra.

[…] We commenced with ‘Shailendra and “Other” Music Directors’, as an overview and then took up Shailendra and Roshan, the fourth highest combination in terms of number of […]

[…] August, 2019 episode of Fading Memories, Unforgettable Songs takes up Shailendra with Hemant Kumar, Ravi and Kalyanji (Anandji). This is in continuation to the series, Shailendra’s songs with other music directors, wherein  we have previously covered  Shailendra and “Other” Music Directors and Shailendra and Roshan. […]