To commemorate Mohammad Rafi’s anniversaries, [Born: 24 December, 1924// Death: 31 July, 1980] we commenced a series of articles on Mohammad Rafi that essentially tried to bring the solo song of Mohammad Rafi from the first film with the music director.  Beginning 2016, we have taken up one five-year slot every year, in the chronological order, starting from 1944, the year in which Mohammad Rafi sang his maiden solo song in Hindi Films.

Till now we have covered

[For the sake for structured documentation, I will be following the alphabetical sequence of Film names in the post.] 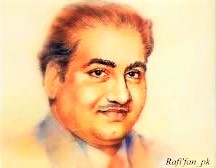 Interestingly, for the year 1956, even as there are so many music directors who have already settled on Mohammad Rafi as a lead male singer, we have a fairly large catch of first films in which a music director has composed solo songs for the first time for Mohammad Rafi.

Sudipta Bhattacharya is totally an unknown name.in so far as Hindi films is concerned. There appears to be one more film to his credit – Taaj Aur Talwar in this year itself.

The song is quawaali-styled composition, rendered in what is recognized as classic Johnny-Walker mannerisms on screen and mimicked by Rafi in the playback.

K Datta (a.k.a. Korgaonkar Datta) was a music director whose main body of the work pertains to the vintage era. He was known for his preference of Noor Jehan as his most favored singer.

I have not been able to locate the digital copy of this song from net.

It was high time that Anil Biswas uses Mohammad Rafi in a solo song. He has used Rafi’s voice for two s0los and a duet (with Asha Bhosle).

Rafi enacts the intense desire to meet the beloved while retaining an undertone of control befitting an ascetic.

The song is set to the Punjabi folk tune heer, meant for the songs sung at the time of farewell of bride from her parent’s home.

Ajit Merchant is one of the legions of music directors who did not succeed at the altar of commercial counter.

Here is a, quite a complex, song to sing, particularly for a film that seems to be based on a mythological subject.

We get to listen to an innovative variation of marching tune.

Naya Aadmi seems to be a remake of a Telugu film, hence barring three songs, which were composed by Madan Mohan, all songs have been composed by the music directors of the original version, i.e. Vishwanaath – Ram Murthy.

The song appears to be a background song.

The songs is enacted by an ascetic on his daily alms-collection round. The song is quite melodious and has deftly embedded Rafi’s signature scale variations.

This one seems to be a background song. .Incidentally song draws upon the Gujarati folk rhythm of Garba.

We have a patriotic songs, composed on the marching tune.

Kamal Mitra is an obscure name.

The composition of the song does full justice to Kaifi Azami’s lyrics. The song appears to be the background song, ending with high-pitched call to the love to listen to the voice of the loved one.

There is a Lata Mangeshkar version, composed to an altogether different style, manifesting more the poignancy of separation.

To end our present episode, I have selected a Mohammad Rafi song from 1956, which is lesser known one:

As we have had enough number of songs for one post, we will take up the songs for 1957 and 1958 in a separate post, planned to be published on 24th December, 2018, on the birth anniversary of Mohammad Rafi.