Welcome to September 2019 edition of Carnival of Blogs on Golden Era of Hindi Film Music.

अमिताभ बच्चनः ‘एंग्री यंग मैन’ से दादा साहेब फ़ाल्के पुरस्कार तक – Mihir Pandya recounts how Amitabh countered negative factors around him to create and created a dominant space for himself that has brought his career to this miles stone.

Why actor-producer Devika Rani was truly the First Lady of Indian cinema – Alaka Sahani – Actor, star, producer, studio boss. Devika Rani walked a path that few women in Indian cinema have managed to. As a new play on the pioneer gets ready to tour, a look back at her journey.

We pick up other tributes and memories:

Hans Jhakhar takes up two vital facets of the Ravi saga on SoY with Ravi and Asha Bhosle: A class combination and Shakeel Badayuni: Revitalising bond with Ravi

Khayyam and Asha Bhosle is the selection of Asha Bhosle’s songs composed by Khayyam. We have taken one song here to get the feel of the songs presented in the post:

Shailendra’s Teesri Kasam: Sapne Jagaa Ke Tune Kaahe Ko De Di Judaai – Teesri Kasam was made in another age and time. But more than 50 years after it briefly lit up the screen before it was yanked off the majestic Apsara Cinema of Bombay, “the finest human document written on celluloid”— as one viewer describes it— continues to live in the heart of every single viewer. Ratnottama Sengupta pays a tribute to the man behind this ‘love-lyric on celluloid’ – Kaviraj Shailendra, with some untold stories about the making of the classic.

Mukesh: A Different Romance in the Voice – Celebrating the uniqueness that was Mukesh – In this article, Monika Kar does not even attempt to list all of Mukesh’s songs that have made an impression, for there are way too many; it simply celebrates this singer for being who he was with sheer sincerity and goodness resonating in his voice. 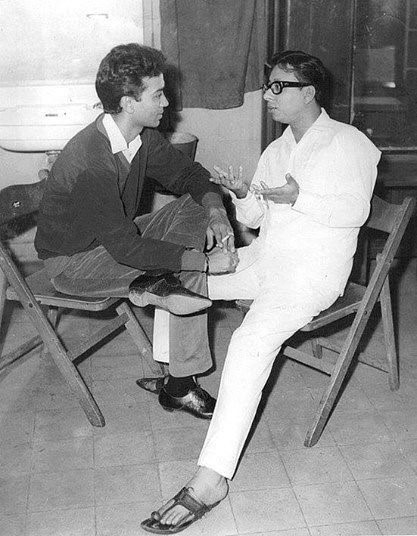 The legendary actor Balraj Sahni as remembered by his son – Alaka Sahani – In a new biography of actor Balraj Sahni, son Parikshat recounts memories of his father’s off-screen life and the troubled yet loving relationship they shared.

The Maestros Called Laxmikant Pyarelal – The first song for which LP played together in the orchestra was a Marathi song – Tinhi sanja sakhya milaalya!! It was after that they became assistants to legendary composers like S D Burman and Kalyan ji Anand ji.

No, I Did Not Forget Noor Jehan’s Birthday! – For those who do not know about the series on this blog – or those who know but would like to look at it again – may please go to last year’s post, which includes links that will take you to prior Noor Jehan posts (including the post from 2015 that includes links to all the others going back to 2009).

The Silent Tributes which became benchmarks in the Hindi film music and no they are not merely copied or inspired, they are tributes in the real sense. E.g.  Bimal Roy filmed a boy sitting on a buffalo while Sadhana sings O Sajana Barakha Bahar Aaye. Gulzar pays tribute Bimal Roy by depicting boy playing flute sitting on the buffalo while the sisters in Namkeen sing – Aaki chali baaki chali

September, 2019 episode of Fading Memories, Unforgettable Songs takes up (Shankar-) Jaikishan and Hasrat Jaipuri’s Songs Fading From the Memory : 1958 – 1959. This is in continuation to the series from the previous episodes which had listed some of the song from 1949 to 1954 and 1955 to 1957.

And, now commence the posts on other subjects.

A Paen on Piano, like Aap Ki Haseeb Rukh Pe Aaj Naya Noor Hain or Dheere Dheere Machal Aye Dil-e-Bequrar and so on.

Only 29 of 1,338 Indian silent films have survived. One man is doggedly telling the story of the era – Who knows what’s out there, says Virchand Dharamsey, the writer of the authoritative filmography of the Indian silent film period between 1895 and the 1930s.

Khaike Paan Banaras – Don – The Banaras Paan Effect –  Archana Chauhan notes that Tamil remake of ‘Don’, Billa (1980) has Rajnikant taking up the dance steps and the dress to match with that of Amitabh

‘Tawaifs’ of Awadh: The first women of Hindi cinema – Shivani Bhasin  – These highly skilled courtesans sang, danced, wrote poetry, and were the purveyors of all that was considered good taste and high fashion.

Other cinemas, other cineastes: on Namrata Joshi’s Reel India is a very wide-ranging book, chronicling of magnificent obsessions – he obsessions of people who live outside the cinematic mainstream, but engage with films in myriad ways, not seeking monetary benefit but doing things because they are compelled to; because cinema is so central to who they are.

Window Romancing With Dev Anand – Amongst all his ways to win his lady love or sing a song, his most favourite style must have been window romancing. So many of his songs are around the doors, windows or balconies crooning soft lyrics in your ears. The takes a glimpse of few such songs and window romance with Dev Anand, e.g. Aise To Na Dekho Ke Hamse Nasha Ho Jaaye – Teen Deviyan (1965) – S D Burman – Majrooh Sultanpuri

The Romantic Rain Songs lists the rain songs of 1990s.

I earnestly solicit your inputs for further broad-basing our cache for the content for our carnival of blogs on the Golden Era of Hindi film music.