Shankar- (Jaikishan) and Shailendra’s Songs Fading From the Memory: 1953

Shankar Jaikishan worked as a perfect team, in professional harmony, and as excellent friends. Their synthesis with Shailendra and Hasrat Jaipuri, their permanent lyricists, created a creative team par excellence was an added bonus. The association of composers Shankar-Jaikishan with lyricists Shailendra and Hasrat Jaipuri, went on to give massive downpour of hits, melodies and innovations, year in and year out. One cannot help marveling about how this fabulous foursome could keep their personal and professional bonds in tact over so many years in the challenging and notoriously fickle milieu of Hindi Film Music. The quartet forged a creative partnership which brooked no real parallel. The unique, prolific and successful bonding between the two Masters of Music with two wizards of words remains a golden chapter in the annals of Hindi film music.

October is the month of Shankar’s birthday (25 October 1922 — 26 April 1987). Our today’s episode is dedicated to his memory. To commemorate the Shankar’s birthdays, we commenced the series on Shankar (Jaikishan) and Shailendra’s songs last year. We covered the years from 1949 to1953 last year. 1953 was the first quantitative peak for the SJ duo. They did seven films, 55 songs in that year. We had covered three of them – Aah, Aas and Boot Polish – in the last episode.

We have also taken up (Shamker)-Jaikishan’s songs written by Hasrat Jaipuri, which essentially focus on Jaikishan’s compositions. 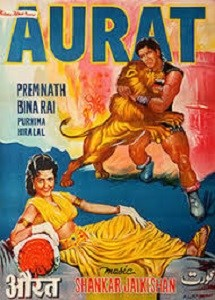 As the title suggests this being a woman-oriented film, all songs are created for the female lead of the film. Apparently, the film draws inspiration from the famous Western mythical story of Samson and Delailah.

This seems to be a copy book situation wherein the heroine melodiously weeps her sorrows. Soft strokes of piano, at the very opening of the prelude music, are the tell-tale SJ orchestration style. From the SJ’s standards, the composition is set to a difficult tune.

The heroine dances to her joy of falling into love. Use of harmonium in small bursts adds to the magic of the composition.

The song is filmed on the second leading lady of the story. For the records, we note that knowledgeable blog writers identify the singer on the screen as Purnima Razi.

The film has three Lata Mangeshkar solos written by Shailendra. We have picked one solo here, to accompany a very-well known Talat Mahmood solo song.

Unlike a SJ composition song is set to a difficult tune and has far less than usual orchestration support in the counter melody. The song changes the tempo of the rhythm subtly during the second and the last stanza.

The song opens to a very exquisite musical prelude and build on one of the Talat Mahmood all-time classic. 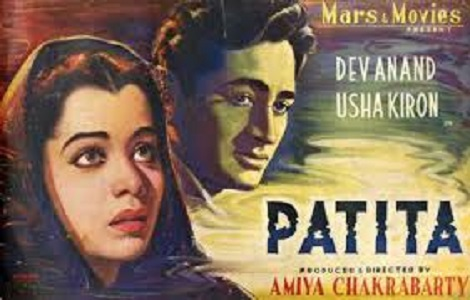 Shankar Jaikishan has used Talat Mahmood for Dev Anand’s playback voice in this film. The three Talat songs – Andhe Jahan Ke Andhe Raaste, Tujhe Apne Paas Bulati Hai Teri Duniya and  Hai Sabse Madhur Woh Geet – instantly got etched into the All-Time Best of Talat Mahmood songs. Hasrat Jaipuri wrote only song, a Hemant Kumar- Lata Mangeshkar duet – Yaad Kiya Dil Ne Kaha Ho Tum – for the film, which also has been an all-time hit. The other two Lata Mangeshkar songs were thus destined to remain in the shadow of the brightly shining glory of these four songs, even though each of them remains a very special  Lata Mangeshkar songs.

We have a playful, fully pleasant mood song, set to a very lilting fast-paced tune., which opens with flute-dominated prelude. Interlude music is dominated by very innovative use of violins. Shailendra is also as his poetical best when he says : the dreams that could not  be seen at nights have indeed materialized  in the day.

Shailendra has used the metaphor of broken toys for the shattered dreams of life, to which Shankar Jaikishan has provided a very heavy, and yet so unobtrusive, countermelody support of violin ensemble orchestra to create the mood of pensive pathos.

The film is a Dilip Kumar – Nalini Jaywant starrer, which did not do well during the first run. However, during the  later on re-runs, it always got a wide support from the fans of its songs. 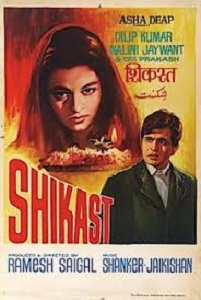 Shankar Jaikishan has so effectively used Hemant Kumar’s soothing voice in this song that lays down the basic philosophy of life for the distressed-from-life ones.

This happens to be also a snippet with which the film ends.

So too ends our episode with a Mohammad Rafi song.

As may be observed from listening to the songs that seem to recede form our memories, Shankar Jaikishan’s most outstanding work of the 1950s was not as awarded as their relatively less qualitative work of 1960s. We will keep exploring this phenomenon in our future episodes.

Indeed, this is one of the sweetest songs from Shankar Jaikishan team.
Sincere thanks for bringing it up on the same page here.