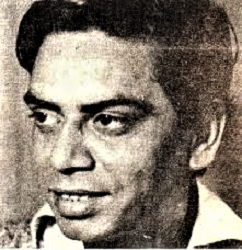 We have taken up Shailendra’s songs with Other Music Directors on this platform every August , w.e.f. 2017, in the memory of Shailendra’s birthday. Till now we have covered

2017 – Shailendra and “Other” Music Directors

We have also undertaken a separate series of Salil Chowdhury and Shailendra’s Songs Fading From the Memory in our November episodes.

S N Tripathi and Shailendra have worked for together for five films spread over a decade. Dilli Darbar (1956) was history-period film in which Hasrat Jaipuri was in the company of Shailendra. Ram Hanuman Yudh (1957) is a mythological film, where too Shailendra shared lyricist-writer space with Ramesh Chander Pandey. Sangeet Samrat Tansen (1962) is again a period-biopic. Shailendra was the sole lyricist for the film to write as many as   songs. Incidentally, S N Tripathi has directed this film as well. Shiv Paravati (1952) is again a mythological film. Kunwari (1966) is a social drama, where again Shailendra had 7 songs and B D Mishra had 2 songs.

Somehow the song sounds much closer to Shanker Jaikshan style. That may be because the song is based on Arabian dance song composition.

Shailendra pens feelings of pathos in the heart of the protagonist who is yearning to meet her beloved. S N Tripathi has used strains of shehnai in the interlude and short pieces of flute in countermelody to reflect the mood of the lyrics.

We have here a fast beat song that is steeped in deep pathos. Shailendra has used very pure Hindi in his composition.

Shailendra and SN Tripathi has weaved n two contrasting moods in one song.

S Ntripathi has conjured up a difficult dance tune. One simply wonders how Shailendra would have fitted in the lyrics in such a dance form –

The second line being repeated is by an unidentified female voice.

This is only song by Shailendra in the film. Sarasawti Kumar Dipak also had one song. All other 9 songs were written by Prem Dhawan

We have here a duet wherein the lovebirds express their love for each other. Shailendra uses simple metaphors like – Indrani Mukherejee saying that one look at you told me who you will be in my life, to which Ravindra Kapoor acknowledges that even though this was new tune on their flute.

The song, and the lyrics, basically are set to a rural folk song style. Of course, Indarni Mukherjee and Ravindra Kapoor easily seem to be able to relate their own feelings with the words of the song.

Shailendra teamed up with Anil Biswas for the last two films in the latter’s career. Sautela Bhai (1962) was film based on Bengali locale of Saratchandra’s story, Baikunther Will (1920). Chhoti Chhoti Baatein (1965) – the first and the last directorial and production venture of Motilal – was based on an extremely sensitive subject of friendly relationship between two grown up people, form opposite sexes, outside their own families.

As the newly married bride steps in to her ‘new’ home, an infant form the earlier marriage of the bride-groom(!) awaits her. She takes him up in her care. The song is composed in Bengali folk Baul style and uses Krishna and Yashoda, who is the mother who brings him up as his own son.

This is song played in a rural drama in the film. The song runs around the story of Ram and Bharat, the stepbrothers, in Ramayana. The main family of the story is there to watch the drama.  Shailendra has constructed the entire sequence in his poem.

A precisely orchestrated, public dance song that is now an almost home play for Manna Dey. Meena Kapoor easily complements Manna Dey in the song. Anil Biswas has very creatively a folk tune from the Eastern States. Shailendra had had, perhaps, a difficult task to set lyrics to this predominantly rhythm-oriented song.

This is all the way a Shailendra song where he weaves in the philosophy of life., right from the word go. In the retrospect, we have generally observed that, in his last few years, Shailendra’s such philosophical songs have foreseen the future events. ‘Alvida’ (Farewell for ever) in this song did turn out to be the farewell by Motilal from this world, by the time the film was completed.

Anil Biswas, Shailendra and Manna Dey are at their individual and collective best in the song.

Shailendra’s association with C Ramchandra in Chhatrapati Shivaji (1952) was on the exclusive basis whereas that for Anarkali was for only two songs.

We have here a marching song. One would wonder how would a song like this would have remained sidetracked even in the periods of when the nation had seen the sea of patriotism at its full tide in the periods of 1962 or 1965 or 1971 wars !

In a film on the subject of Chhatrapati Shivaji, a qawwali has also been squeezed in !

Shailendra has freely used Farsi words aa can be expected in those days.

Shailendra is at his simple best in the song.

C Ramchaandra, of course, is at his melodious best in both songs, as he was will all other songs of Anarkali.

In order to traditionally end our post with Mohammad Rafi song, we will have to track back to Sangeet Samrat Tansen (1962) –

Manna Dey and Mohammad Rafi so seamlessly complement each other in the song.

Our journey of Shailendra’s songs for Other Music Director continues….

[…] 2020  episode of Fading Memories, Unforgettable Songs takes up Shailendra with S N Tripathi, Anil Biswas and C Ramchandra in the Shailendra’s songs with Other Music Directors series. Till now we have […]