Salil Chowdhury and Shailendra’s Songs Fading From the Memory: 1957

Salil Chowdhury (10 November 1922 – 5 September 1995) was undoubtedly a versatile music personality – writer, lyricist, script writer, activist and of course one of the most respected music composers. His music was rooted as much in the folk music of Bengal and Assam as it was in the Western symphonies. His compositions and orchestrations had a very district style. Most of his compositions would be incredibly challenging to sing. And yet, the sheer melody that it offered made many of his difficult tunes are also his immensely popular songs. His lyricists for a good many films, Shailendra (B: 30-8-1923/ D: 14-12-1966), too, was a person rooted to the basic of life. Shailendra may not be considered a poet in the traditional literary parlance, but his simple lyrics had had profound impact on his listeners. His command of delivering an immensely powerful idealistic message or describing a complex feeling in the simple words was unparalleled. 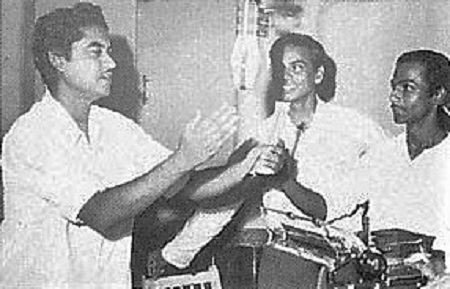 Even when they had fundamentally very similar sociopolitical mindsets, the chemistry of apparently two different music personalities created very unique set of Hindi film songs. In terms of ratio of memorable songs to total songs or variety of moods represented, qualitatively quite comparable to Shailendra-Shankar Jaikishan or Shailendra -S D Burman, Salil Chowdhury and Shailendra quantitatively have composed songs only next to these two combinations.

Presently, we will take up Salil Chowdhury and Shailendra’s songs receding frm the memory form the three films – Ek Gaon Ki Kahani and Musafir for the year 1957. Salil Chowdhury had composed music for Apradhi Kaun and Laal Batti (with Majrooh Sultanpuri) and Zamana (with Indeevar and Prem Dhawan; the film had two songs composed by Anil Biswas, too).

Ek Gaon Ki Kahani is a film directed by Dulal Guha, wherein Talat Mahmood has also acted as the lead actor. The films had two of Talat Mahmood’s all-time-great songs – Jhoome Re Neela Ambar Jhhome Re and Raat Ne Kya Kya Khwab Dikhaye – and a Lata Mangeshkar solo – Boley Pihoo Pihoo Pee Papihara – which as sweet and playful as is a difficult tune. 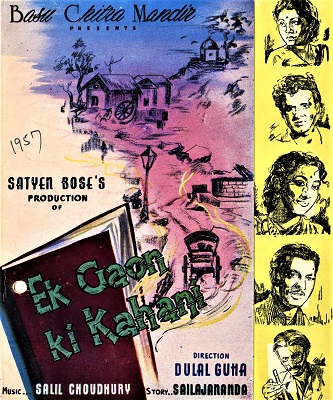 The song opens with a very lilting prelude. The duet, though extremely sweet, is indeed a difficult composition.

This is a lullaby. Salil Chowdhury has used relatively easier composition Use of soft sounds of ensemble of violins. The main song as well as the interlude orchestration has Salil Chowdhury’s signature flute pieces

The occasions of festivals like Holi have provided ideal situation for songs in Hindi films. Different directors have used the situation for different purposes – sometimes the song just comes in as a filler or sometimes as an important element of the story.  Lyricists compose the lyrics accordingly. Different directors also have adopted very different approaches in composing the song, even if they have stuck to the normal Holi song tunes of North India. Salil Chowdhury has provided ample improvisations in the songs to make it sound very realistic composition.

Based on the Ritvik Ghatak story of three families’ ’traveler’ stay at a house, Musafir was the maiden directorial venture of Hrishikesh Mukherjee. In effect, it connects up three stories with a common link of a house. Every time the family leaves the house, like a traveler on the move, at least one member of the family will state that she will always remember this house. The film was awarded a  Certificate of Merit for Third Best Feature Film in Hindi for the year 1957. 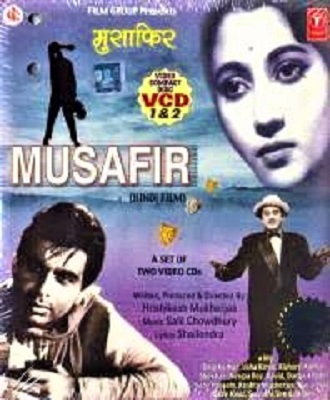 Filmed on Suchitra Sen, the lead actress of the first of the three episodes, is a simple bhajan, in terms of the song genres. The song has a special important place in the narrative of the episode.

This is a song pertaining to the second story in the film. Shailendra has weaved in wonderful dreams of the middle-class people in each stanza. Salil Chowdhury has composed a very pleasant tune, and Kishore Kumar is at his usual maverick improvisation best.

The song have several unique features.

First, Shailendra has made a cameo appearance of street song performer, with a harmonium strung on. This is second such on-screen performance. The first one was in the song Chali Kaun Se Desh Gujariya Tu Saj Dhaj Ke (Boot Polish, 1954).

Second, is Keshto Mukherjee’s maiden appearance on Hindi cinema. Her he comes up in the role of a autistic handicapped person, a very routine feature of such travelling street performers so as to encash some human pity into more alms catch. At the end of the song ,just watch him approaching Kishore Kumar to part with some cash, all in sign language !! What a pity that such a wonderful comedy actor remained typecast as THE drunkard in the films!

Shailendra is at his usual egalitarian best mood at every word of the song!

First, of course, the most novel feature of the song – Dilip Kumar singing his own song. The songs, for a non-regular singer like him, is not that easy to sing. But, Dilip Kumar has done such a marvelous job of it.

Hrishikesh Mukherjee has filmed the Lata Mangeshkar part as a memory recall running at the back of mind of Usha Kiran. As such, the voice seems to come from deep within!

The title and theme song that carries the message of the film, is filmed on Mohan Choti (a.k.a. Mohan Goraskar).

The song comes up once more in the film. The clip here has both versions.

We normally take up one Mohammad Rafi song to end the episode. However, in the present case, we do not have any Mohammad Rafi song in either of these films. So, we will take a small detour, and import one song from Salil Chowdhury’s 1957 films with other lyricist.

Salil Chowdhury has used chorus both as chorus accompaniment and as counter music support.

Our journey of Salil Chowdhury and Shailendra’s receding from the memory songs on this platform.