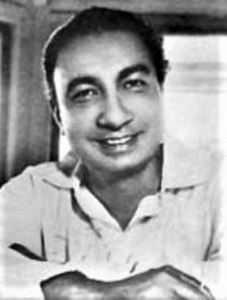 Sahir Ludhianvi, whether as a person (at least outwardly) or as a poet or as a lyricist, was known to the world for his bitterness (‘talkhi‘), his moodiness, his ego, his sharp tongue or his fierce belief for the equality of lyrics in the effect of any composition. might have made him intolerable. Maybe it was these inherent traits that came in the way to build a lasting relationship with equally strong-willed, outspoken and fiercely proud of his artistic skill (as a music director) O P Nayyar. But then, on the other hand, he had had a very long, fruitful and epochal relationship with equally (artistically) moody, choosy and fiercely accord supremacy of melody, S D Burman. As such, one would not be inclined to buy a very passing observation that Sahir Ludhianvi was more at ease with talented, but not so-strong personal traits music directors like Roshan or N Datta or Ravi. Of these relationships, Sahir Ludhianvi’s relationship seems to be quite different. 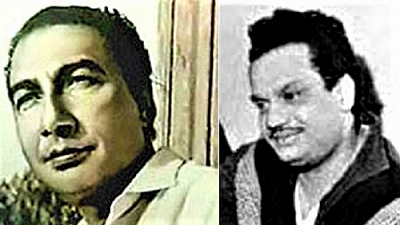 Whatever be the factors for N Datta (a.k.a. Dattaram Baburao Naik – B: 12 December 1927 – D: 30 December 1987) and Sahir Ludhianvi’s professional association, there cannot be any denying that it was special in more ways. After working for some time with Ghulam Haider, D Datta joined S D Burman as his assistant. It was during the making of Jaal (1952) that he met Raj Khosla, who immediately took him up as independent music director for his own maiden directorial film Milaap -– Ye BahroN Ka Sama – (1955). Though the film did not do well on the box office, G P Sippy’s Marine Drive – Ab Woh Karam Kare Ke Sitam Main Nashe Mein HuN – in the same year and then Sippy’s next film Chandrakanta – Maine Chand Aur SitaroN Ki Tamanaa Ki Thi (1956).

When the time came for BR Chopra’s one more film, Gumrah (1963), N Datta suddenly developed cardiac trouble. He was jus 36 then. He did come out of that phase, but he had lost not only his place in B R Chopra camp, but also his own confidence. In order to maintain visibility, he started signing even B grade films. Sahir Ludhianvi, in fact supported him, even during this phase and did write lyrics for such films even when he had already scaled the front-line position by then. N Datta, in the company of Sahir Ludhianvi, could compose Talat Mahmood’s one of the all-time best Ashqon Ne Paya Hai Woh GeetoN Ne Diya Hai (Chandi Ki Deewar) in 1964 and then Ponchh Kar Ashq Apni AankoN Se (Naya Raasta) in 1970. Of course, N Datta also compsed several memorable songs in association with two other lyricists Jan Nissar Akhtar and Majrooh Sultanpuri in the same period. But the luck was not on his side.

N Datta’s exposure to Goan culture, can be very evidently seen in the use of Saxophone, Accordion or drum in the orchestration of his western-biased compositions. It is this genre of N Datta’s music which lends a special dimension to Sahir Ludhianvi – N Datta relationship. Sahir certainly has an extra mile to provide lyrics away from his traditional Urdu-heavy poetry even for the otherwise light-mood songs with other music directors.

My selection of the song for the present episode of Sahir Ludianvi’s 18 films association of Romantic Songs with N Datta has marked preference for such songs. In the process, I have also tended to give as wide as possible range of playback singers that N Datta has so comfortably used for his wide-ranging compositions, which have unfortunately received as much attention as their more famous songs already mentioned hereabove.

Sahir Ludhianvi and N Dattaa’s 18 film association has one un-released fil, Picnic- one of the many shelved because Guru Dutt had committed before it could be completed.. A couple of songs are available on YT. Here is one romantic song, which is penned by Majrooh Sultanpuri, but needs a mention here because the tune is so similar to Aaj Ki Raat NahiN Shiqve Shiqayat Ke Liye (Dharmputra, 1961)

So this is where we end Sahir Ludinavi and N Datta’s 18 film association which began with N Datta’s maiden film as independent music director, Baalo (1951, a Punjabi film),  and ended with N Datta’s last film Chehre Pe Chehra (1981), and thus, has spanned over no less than 30 years.