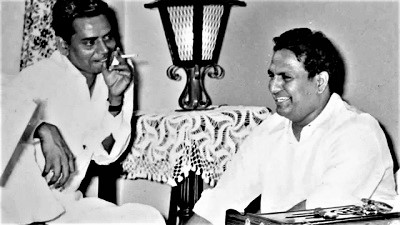 The typical model of the films in 50s had an average of 5 to 8 songs. Where as most of the  then successful music directors were able to give two to three hit songs in each film, Shankar Jaikishan had that very unique knack which created almost all songs of each film a great hit. As a result, whereas other music directors generally handled one or two films a year, S-J started getting three to five films a year, even when they went on jacking up their fees. In the beginning, as can be expected, Shankar and Jaikishan used to devote a good time together for the conception of the music composition for each film.

Several historians have recorded that with the mounting pressure of ever increasing workload, Shankar and Jaikishan had to compose the tunes for the songs that each one had pre-selected for a given film independently. That division of labor also lead to each partner working more with a lyricist with whom each one was naturally more comfortable with.  As is very widely believed, and accepted, Shailendra mostly worked with Shankar and Hasrat Jaipuri with Jaikishan. After his marriage, it is said that Jaikishan had started composing music more from his home whereas Shankar used to work from their music studio.

The film historians also do take note of the fact that all through the 50s, even after their clear division of work there still was that great camaraderie between the two, each one improvising the other’s tune or orchestration. There have been notable instances when it is said that two had worked even with other than their normal lyricist partner.

It has been so much of personal pleasure for me to commemorate the birth anniversary of Shankar Singh Raghuvanshi, of this great S-J team, through the present series of Shankar (Jaikishan) and Shailendra’s Songs Fading From the Memory from October 2018. That pleasure gets multiplied several times while recalling their more famous numbers and listening to their less familiar songs from the films released in chronological order of year.

Till now, we have covered the years 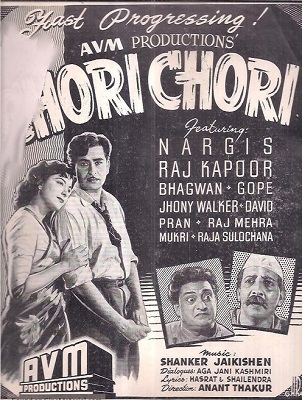 As may be observed from the poster of the film, Chori Chori was romantic film (with the then most coveted lead pair of Raj Kapoor and Nargis) fairly mixed with comedy (with two big guns – Johnny Walker and Bhagwan – playing comically grey roles).

Essentially a mandatory comedy song always assigned to Bhagwan Dada in any film, stands out because very effective lyrics and equally pleasing composition by Shankar (Jaikishan).  Just note how tastefully orchestration for both interludes has been composed.

The opportunity of entertainment stage show as part of the marriage ceremony has been converted by the music director and lyricist to weave in a traditional farewell song for the brides. Shailendra comes up with lyrics that has mix of pleasure of the friend getting married and sorrow of being away once she settles at the in-laws’ place. However Shankar(Jaikishan) uses the dance sequence to present their signature dance composition style – multiple rhythm instruments backed up multi-instruments interlude and counter-melody orchestration. 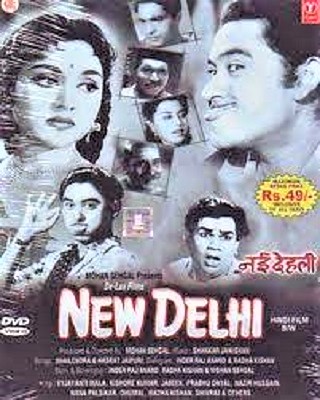 The story of the film moves around a newly graduated north Indian young man’s search for a rented premises to settle in his new job in New Delhi, which lands him at the doors of tradition bound South Indian family – both for home as well as his love. Kishore Kumar in the male lead and Vyjaintimala in the female lead naturally provide music directors a templated platform for light mood male songs and classical dance based female songs. Zone would certainly expect dance-based songs to be Composed by Shankar, but even majority of Kishore Kumar songs also have been composed by Shailendra-Shankar composition.

One more fine example of Shankar (Jaikishan)’s own signature style composition for a dance song – rhythm by traditional Indian-rhythm instruments but orchestration of interlude music scores by multiple western instruments.

The song is filmed back-to-back with Nakharewali…

Essentially this a traditional Punjabi folk dance. But just see how Shankar has given it a very different treatment by first listening to a song from Punjabi film

then listening to the Shankar (Jaikishan) composition.

We have one more bride farewell song that will go on to demonstrate the wide range of tunes and compositions that Shankar Jaikishan could commandeer for the same theme. 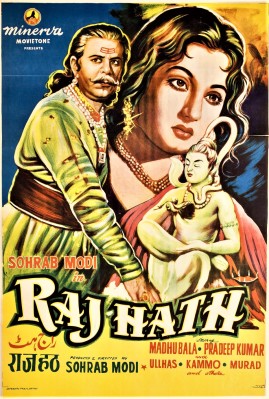 Rajhath was Sohrab Modi’s romantic fantasy drama based on a historical plot. The story, revolving the animosity being perpetrated through the generations between two empires gave Sohrab Modi to lay the plot for a costume-drama and the two children of each state falling in love provided Shankar Jaikishan a wide freedom to compose songs that would help create one more hit album. Shailendra’s songs like Chale Sipaahi Dhool Udaate (Manna Dey, chorus) Mere Sapne Mein Aana Re (Lata Mangeshkar)  Naache Ang Ang Ang Tere Aage (Lata Mangeshkar, chorus) went on to big hits at the box-office.

Aa Ja Aa Ja Nadiya Kinare TaaroN Ki Chhaiya Tujhe Kab Se Pukare – Lata Mangeshkar, chorus
The prelude to the dance song gives faint hint of tune that Shankar Jaikishan used as a full-fledged song in (possibly) in Kanhaiya (1959), which I am not able to precisely remember at this stage..

If only all the tunes the duo had composed during teir music room had been well documented, the Hindi Film music would have been far richer than what the tunes that went on to be converted in to songs or background pieces.

A love story in a Hindi film has to mandatorily have a phase wherein the there are roadblocks to the road of love of the two protagonists, which would provide the opportunity for a couple of pathos songs to be composed by the music director.

If one needed any validation test for Shankar Jaikishan’s vast range of tunes, here is one more bridal farewell song.

One more aspect of Shankar Jaikishan’s unique style that should be noted here is their use of very fast rhythms where normally other music directors would have used a slow rhythm in lower octave scale.

Aa Gayee Lo Aa Gayi Main Jhoomti… Ho AkhiyoN ko AkhiyoN Se Chumati – Lata Mangeshkar
The situations seems to be the case where Madhubala has impersonated as a native tribe girl and performs their traditional song with accompaniment of a folk-instrument (if I am not mistaken, it is Sarangi) player as a company.

Shankar (Jaikishan) seem to have game fully tried to recreate the desired effect with relyin more on use multiple flutes as the main instrument accompanying sarangi , but the composition does not come out from the shadow of their signature dance composition style – a fast rhythm with multiple instrument-orchestra.

We have one more film -Patrani – for the year 1956, but that deserves a full-scale post, Hence, we will carry forward the year 1956 to  one more episode.

We will continue remembering Unforgettable Songs that seem to Fading away from our Memories every second Sunday of the month next year too……..