Traditionally, in India, the books of accounts would close on the close of the Vikram calendar year, typically a no-moon (night) day. Opening of the new books of accounts would be carried out with an elaborate adoration ritual. With the English rule, the limited companies started following the end of March as the financial year end, so as to synchronize reporting of their profits and loss with the Income Tax Act accounting year.

Therefore, over the years, fiscal year end on 31st March has acquired an aura of its own. People differently connected with that event have developed their own routine drills. We look at some of such representative activities from a cartoonist’s perspective. 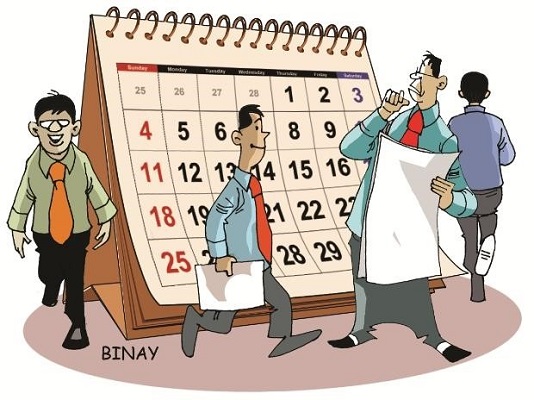 One of the first possible activities is making sure that financial targets are met – the gods, too, included.

Obviously, those connected with the operations also have to brace up for meeting targets –

One major activity is ensuring that budgets are used up, so that the allocations for the next period can be maintained.

Last minute tax saving investments have a risk of end up going into unsuitable avenues. Preeti Motiani does advise to avoid taking a last minute calls.

Frank and Ernest represent people who seem to realize that trying to meet the end meet when you reach one end, essentially, works out to be a futile exercise. The efforts better be judiciously spread all round.

Be it budget numbers or the results number, there is never a dearth of people who doubt the accuracy of the numbers. Trust Dilbert to have The solution!

There would, perhaps, be universal agreement that the financial numbers make quite dreaded reading. 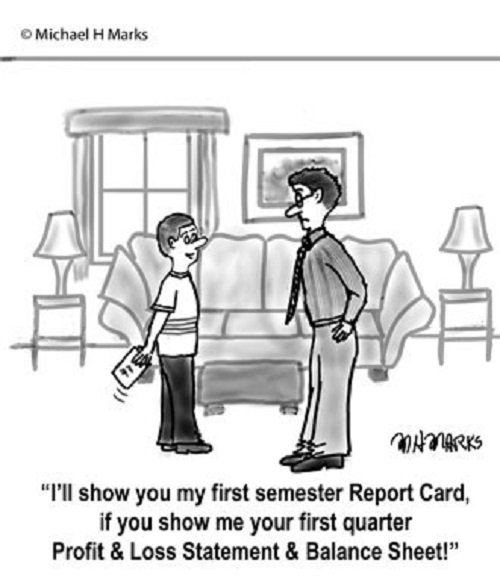 One solution is this –

But when all efforts to make the numbers present a decent enough picture, one tends to lean to the option of ‘creative accounting. Well, if you do not know the how to, there are classes being run to train you up!

One performance indicator presents this picture – 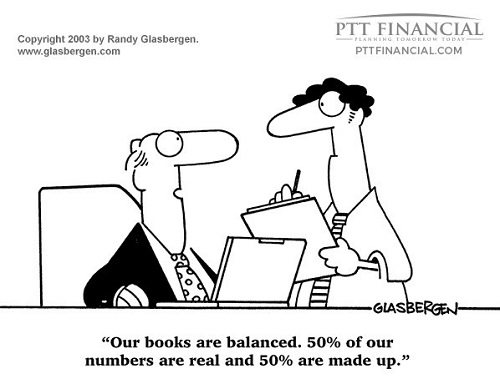 Before we go back to the our share of tasks for the March-end, here are two differing views-

From the people of world of accounts

And the all the rest of us –

What have you to say?

Oh, too busy with March-end now!!

OK, would not then bother you with that.

But, do take to time to share your viewpoint, preferably from a cartoonist’s point of view…whether you have been enjoying your toil for the March-end pile pf activities or, would like to laugh off the stress……

The standard, in its most common form, is defined as norm, convention, requirements. In essence, these are mutually agreed way(s) of doing something. As such, the standards would cover any activity under the sun, provided the concerned interested parties agree to a way of doing that thing.

The standards can be categorized into 4 major types:

For the subject of today’s article, we have confined our discussions to the technical standards, in general, and Management System Certification (MSC) standards published by ISO, in particular. We have also consciously stayed away from explaining the subject specific terminology, since we intend to address the article to non-ISO–MSC- standards practicing people as well.

The trigger for compiling the cartoons on ISO MSC is the  World Standards Day  – Each year on 14 October, the members of the IEC, ISO and ITU celebrate World Standards Day, which is a means of paying tribute to the collaborative efforts of thousands of experts worldwide who develop the voluntary technical agreements that are published as International Standards.

Every year a very relevant theme is selected around which the celebrations of Day are planned.  The theme for World Standards Day 2019 is Video standards create a global stage – The video compression algorithms standardized in collaboration by IEC, ISO and ITU have been honored with two Primetime Emmy Awards, recognizing that these standards are central to industry’s ability to meet rising demand for video, one of the most bandwidth-intensive applications running over global networks.

International Standards meet industry demand for powerful compression capabilities. They also enable smooth transitions to the next generation of video compression technology, helping industry to maximize return on each wave of investment.

Having standards recognized and respected all over the world means that video encoded on one device can be decoded by another, regardless of the device being used. This introduces economies of scale that help to grow the market, giving innovators the confidence to invest in new video applications and services.

To create the innovations of today and tomorrow we have to work together, but first we need to understand each other. To exchange knowledge, to make things compatible, ISO standards are the solid base, the common language that humanity can rely on. (EN, ES, FR, DA subtitles)[1]

ISO has published around 22812 International Standards on wide ranging industries and subjects.

With so much of the background information, we will now gradually switch over to our core topic.

Cartoon, being a medium to communicate in a humorously graphical art form, this tool is now very systematically and highly professionally is used to promote and popularize ISO standards .

One of the cartoonists who do such graphics for ISO, Cartoonist Alexane. Rosa, tells: “With a little imagination and humour, the human dimension of technical standards can usually be communicated through cartoons and colourful graphics.”

The cartoon graphics are also very effectively used as training aids for easily explaining the contents of the standard as well as an aid-de-memory for maintain that understanding for a longer time.

These graphical curation-oriented tools are also used to convey the practical benefits of implementing the ISO standards in the organization.

The following graphic is used to covey the concept – “New standards become new ideas”. It graphically conveys what is textually conveyed as “Once we have found new ways of doing things, we incorporate them in our Quality Systems. ISO 9001 was the foundation, now we start to build the house.’ 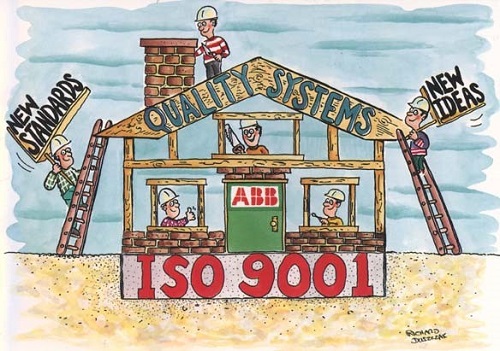 And now we take up the cartons that inherently have a satire embedded into the message it conveys. The message may be a soft satire or a pithy punch, but in the ultimate analysis, it tells ISO-MSC practicing professionals what to-do and, generally, what not-to-do.

As is the general prevailing practice, every country has its own standard, and some times several industries, and several organizations in an industry will have their own standards. 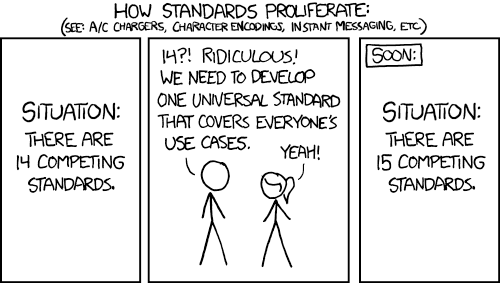 This is the genesis of ISO coming into existence, to act as a central, international confederation that builds and publishes common, universally applicable, international, standards.

Many professionals (mistakenly, of course) treat the standard as a gospel! 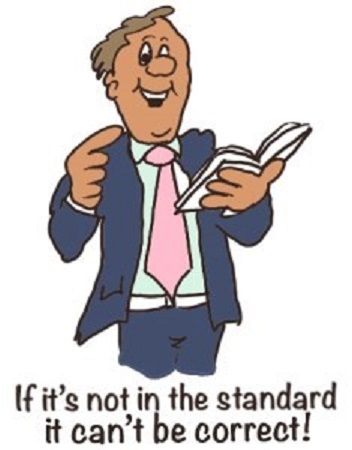 One major intent of the way the international standards are written is to present the content of the standard in as easy as possible manner to understand, leave the minimum possible room for too many possible alternative interpretations. But, by the time that gets explained and / or and implemented by The Experts, it becomes more and more garbled.

The most telling satirist commentary comes from the Dilbert (which incidentally is a subject that can be taken up for an independent, full-scale, discussion). The following strips are self-explained punches: 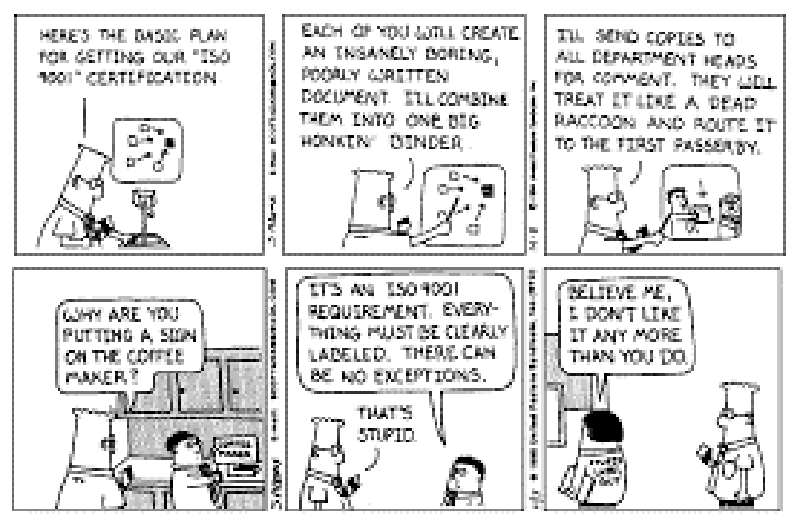 The organizations associated with practice of implementing, auditing or certifying the management system standards must keep questioning about the outcomes of application of management systems – . “Is certification benefiting the operation of business operators?” “Isn’t certification processes obstructing the real ISO mission? …In other words, unless it is a system to improve and create sustained success for your business, management system is worthless.

This positive attitude, performance oriented and people centric guideline sparked the revised design of new structure of the ISO standards to come up for revision or being published first time after 2012. The new High Level Structure now seeks to make the standards proactive, responsive and wider-eyed than was the case of the standards designed before.

As we reach the celebrations of Deepawali, I take this opportunity to wish a bon voyage to the ISO MSC fraternity in their search for the sustained success of the organization by implementing the standards in their true spirit….

The Cheif Minister of Paschim Bangla seems to have made up her mind to remain at the epiceter of controversies.

She seems to have been caught this time, in a warp, not heard in any democratic state – alleged impriosnment of a university professsor, on the basis of a complaint by her party cadre member that the professor was spreading her cartoons via e-mails.

Here is a link to 49 cartoons [http://cartoonexhibition.blogspot.in/2012/04/cartoons-mamta-banerjee.html],put up on their site by Kerala Cartoon Academy.

The reason for placing it on this blog  is only to support the campaign against whimsical arrest of a cartoonist by W.B Govt.

Cartoons may not all be great but the spirit of protest is the idea.