To commemorate Mohammad Rafi’s anniversaries, [Born: 24 December, 1924// Death: 31 July, 1980] we commenced a series of articles on Mohammad Rafi that essentially tried to bring the solo song of Mohammad Rafi from the first film with the music director.  Beginning 2016, we have taken up one five-year slot every year, in the chronological order, starting from 1944, the year in which Mohammad Rafi sang his maiden solo song in Hindi Films.

Till now we have covered

Presently, we are into the 3rd Five-Year Period of 1954 to 1958, of which we have already covered 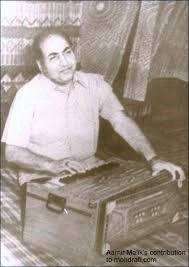 1957 had as many as 187 solo songs of Mohammad Rafi. Apart from the music directors who already have been regularly selecting him, we see music directors, like Anil Biswas, Ajeet Merchant, Shivram Krishna, who had first solo with Rafi in 1956 also opting for Rafi again.

In terms of numbers, 1957 does not seem to have many of Mohammad Rafi’s maiden solo songs with a music director. But the ones that are there, more than make up for the paucity of numbers.

Dattaram (Wadkar) had had a maiden solo song with Mohammad Rafi that has gone onto become a milestone song. In his later films Dattaram seems to have experimented with other male singers like Mukesh and Manna Dey too. However, his own career unfortunately could not reach the critical escape velocity, for reasons other than his merit as composer.

The song has remained so evergreen, that hardly anything more need to be said about it.

Ramnath has only other picture, Meera of 1947 to his credit. This is the film that was a remake of the Tamil version. Both had M S Suubulaxmi as the lead actor and, obviously, the lead singer. Ramnath was the music director who seems to have been added for the Hindi version.

Getting to listen the song for the first time!

Jaidev, though did not use Mohammad Rafi in his maiden film Joru Ka Bhai. However, he has several of Rafi’s greatest songs to his credit.

Even though the song has not attained the level of popularity that the Anil Biswas composition of 1960 film Angoolimal has attained, Mohammad Rafi has full justice to Jaidev’s concept of composing the tune to the spirit of the message.

Ravi made his debut from ‘Vachan’ in 1955. This film had two duets of Mohammad Rafi – a classic tonga song – Jab Liya Haath Mein Haath and one of the pioneering song in the genre of beggar songs –  O Babu Ek Paisa De De .

Here is another successful experiment of using Rafi’s voice for a background title song. Ravi has used voices of Hemant Kumar (Ulaj Gaye Do Naina) and Talat Mahmood (Sab Kuchh Luta Ke) in the film..

Basant Prakash began his career in Hindi films from 1942. So he becomes one more of vintage era music director to work with Mohammad Rafi. He has composed two solos Dharti Maan Ke Veer Sipahi Jeene Marne Aaj and Gajar Baj Raha Hai Sehar Ho Rahi Hai in ‘Maharani’. I have not been able to locate the digital links to these songs.

To end the year with live linked song, we reach out a forgotten song from the film which had one Rafi song which remains a milestone even today- Jawan Ho Ya Budhiya Ya Nanhi Si Gudiya – Bhabhi (1957) – Music: Chitragupta – Lyrics: Rajinder Krishna); –

1958 has a fair catch of songs befitting our subject.

Mukul Roy, brother of Geeta Roy (Dutt), debuted with Sailaab in 1956, which he had produced too, in association with his sister.

On the Brother Mukul Roy page of the site Geeta Dutt.com, it is noted that the song borrows its main body and interlude from “Bimbo” – a 1953 Jim Reeves song.

Khayyam, technically, could be considered to have made a debut with a 1949 film Parda. But here we have films with his more official name. We have two films in this year. So, instead of choosing which film should appear as the one to include a maiden Rafi solo, I would prefer to place Hai Kali Kali Ke Lab  Pe Tere Hush Ka Fasana (Lala Rukh, Lyrics: Kaifi Azmi) in the phigh pedestal of an evergreen song. That leads us to another film, Phir Subah Hogi, in the same year.

Here is the least noted song from the film which had some great Mukesh songs, including a Mukesh- Rafi duet, Jis Pyaar Mein Ye Haal Ho. The present song is a beggar genre song, wherein chorus of support singers also join Mohammad Rafi.

R Sudharshanam is a music director from the Tamil films, and as such would be content with scoring music for the remake-into-Hindi films.

We have what is popularly known as Tonga genre song, wherein Rafi maintains high scale to reflect the high mood of the song.

Iqbal Quereshi, is one of those fairly known music directors, who could not make it as big as his caliber was. He makes a debut this year..

This a background title song, and assuch conveys the core message of the film.

Adinarayana Rao, also is a music director from Telugu films, who makes appearance on Hindi films because of the remakes form the South. He, also, is the producer of Suvarna Sundari, the film that figures presently.

The song is possibly made to cater to the Hindi film audience.

This is a background song, which typically is used a vehicle to carry the film story forward .

Dhani Ram, as per some of the records, was Guru of music directors like Vinod and O P Nayyar.

A fast paced, drunkad (sharabi) genre song, which I hae listened for the first time.

This appears to be the background song, which typically is played with the film titles.

Well, on the whole, the third five-year period of 1954 to 1958, for Mohammad Rafi’s maiden solo song with a music directors, has indeed proved to a very rich experience that has refreshed as many known or quite unknown songs, with a large catch of gems as an add-on bonus.

Next year we will take up the 4th Five-year period of 1959 to 1963, which expectedly should be as interesting as our present 3rd five-year period.

All the three separately posted posts of Mohammad Rafi’s First Solo Song With The Music Director: 1954 -1958 can be accessed at / downloaded by clicking on the hyperlink.

Welcome to May 2016 edition of Carnival of Blogs on Golden Era of Hindi Film Music.

We begin with our regular Anniversaries section.

Forgotten Composers Unforgettable Melodies: Iqbal Qureshi –  Once you get to listen to the songs, one would simply wonder how come such a talented music director did not succeed commercially after having composed such songs. Even some of his less heard songs too are a treat to listen to, even today:

We now take a look at posts on other subjects –

My Favourites: ‘Don’t Go’ Songs – All the songs in this list have that one thing in common – they are all songs that entreat someone not to leave. It doesn’t necessarily have to be the first phrase in the mukhda, but the entreaty has to appear in the mukhda itself. Here are a couple less heard ones –

Ten of my favourite cynical songs – Ten songs that speak of the singer’s cynicism, his or her belief that the world is not a nice place. At times the bitterness boils forth in a fierce and/or despairing rejection of the entire world; at other times, it is cloaked with satire or a sort of bitter humour. Perhaps even smiles. But the cynicism is there, if you only pay attention to the lyrics. Here is the one as an example:

Moon and Mumbai (Bollywood) – Guest Article by D P Rangan –  Film makers in Mumbai and Chennai, the first two centers of film studios, had also fallen under the influence  of Chand, the Moon and used it as scene creator ab initio, and music directors had risen to the occasion and composed immortal musical pieces for the heroes and heroines to cavort about in joyful abandon. The post and the discussion thereon presents Chand in its all shades:

Madhubala in Greece – Did you know that Madhubala was so popular in Greece in early 1960s that a song was written in Greek for her and sung by perhaps the best singer ever of the “Laika” genre Stelios Kazantidis. Here is the song with English Translation

Suraiya on the sets of Goonj (1952) – Singing star Suraiya makes friends with a horse on the sets of Kwatra Art Productions’ “Goonj”; co-workers look on interestedly.

A music link – Working with a grant sanctioned in 2008, Suresh Chandvankar steered the Endangered Archives Programme (EAP)190 project that has successfully digitized gramophone records, advertisements and publicity material as well as catalogues of the Young India record label that operated in Mumbai from 1935-55. A staggering 1,427 items populate this extraordinary collection which one can now access for free (http://sounds.bl.uk/World-and-traditional-music/Young-India-record-label-collection). [Once you visit this site, you will also find 103 item collection @Music From India.]

For the present, I did not find a fresh post @ that can be taken up here. That gives a good opportunity to go back a little in time and listen to a select Geeta Dutt songs, composed by Madan Mohan @ Madan Mohan: The Composer of the Classes By Gajendra Nand Khanna.  These are the songs that have western tunes, fairly heavy orchestration and a very lively Geeta Dutt. These songs amply show that Madan Mohan was capable of doing heavily instrumented songs as well when he did such songs.:

We have commenced Micro View of the Best Songs of 1949 @SoY, by now a well-settled, annual review feature of visiting the songs of particular year under the subject of Best songs of year. This year we have Best songs of 1949 for the Base. We have first taken up Male Solo Songs, and have covered G M Durrani, Talat Mahmood, Surendra and ‘Other’ Male Playback Singers till now.

We end our present episode with a posts/ articles that cover Mohammed Rafi, from a wide-ranging point of views –

Bhoole Bisre by Prakash Gowda – A zero budget short film with a million dollar message, by Prakash Gowda, that narrates the story of an old man who yearns for a hearing machine, just so that he can enjoy the songs of Mohammad Rafi.

Mohammed Rafi also always used to sing a song in the native language whenever he would visit different countries. Not many people know that Mohammed Rafi visited Kabul, Afghanistan in 1975 and recorded few farsi songs in Radio Kabul. Here is such rare non-filmi farsi song of Mohammed Rafi, with Afghan female singer Zhilla. This song is composed by Hafizullah ‘Khyal’ and recorded in Radio Kabul in 1975 with Afghan musicians.
Aye Taaza Gul Tu Zeenat-e-Gulzaar-e-Keesti
(Oh fresh flower, you are beauty of which garden?)

Similarly when he visited the capital city of Suriname, Paramaribo, he sang Baharon Ful Barsao in Suriname language. Here is that clip where we can listen to his live performance in Suriname.

I look forward to receive your inputs for further enriching the contents of the posts…..