To commemorate Mohammad Rafi’s anniversaries, [Born: 24 December, 1924// Death: 31 July, 1980] we commenced a series of articles on Mohammad Rafi that essentially tried to bring the solo song of Mohammad Rafi from the first film with the music director.  Beginning 2016, we have taken up one five-year slot every year, in the chronological order, starting from 1944, the year in which Mohammad Rafi sang his maiden solo song in Hindi Films. Till now we have covered

Presently, we will take up the second part – 1961  – for the 4th Five Year period. The films appear herein in the alphabetical order of their names.

In our earlier articles we used to take due note of the popular, and not-popular-but-remarkable songs for the years under review for those music directors who have already appeared in the previous Five-Year periods. We have continued with that practice.

As may be expected, in the decade of 60s, we find more songs that went on to become popular, sometimes far more than the more meritorious songs from the same film. Relative longevity was seen to be shortening up. However, this possibly outcome of the changing taste of Hindi Films – as more films went color from B&W format, the element of art in the film was becoming more a special genre, filmmaking had better technical back-end support. Now, films, in general, were the commercial films – set to a few stereotypes and their variations. In so far as the Hindi film music was concerned, ‘60s saw the beginning of the ebb, from the high highs that were scaled till now.

First, we will note the popular songs for the year for those music directors who have appeared in the previous years.

We now take a closer look at Mohamad Rafi’s first solo song with a music director for the year 1961. This year, we have three very talented, but not commercially successful music directors, one who succeeded by defying the Hindi Film ‘normal’ of ‘assistants do not succeed’ and two music directors for the South remakes.

In order to err on the safer side, we have included all the solos of the film wherein Mohammad Rafi and a music director have their first solo song.

Not accepted well in Hindi Films, S Madan earned big fame in Punjabi films. Many of his songs in Punjabi films have been plagiarized in Hindi films. He assisted Vinod in the early part of his career.

The background song epitomizes the division between two brothers.

It seems every remake – dubbed version- of South Indian religious films has at least one song by Mohammad Rafi. 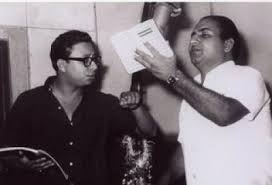 When Rahul Dev Burman (27 June 1939 – 4 January 1994) debuted as an independent music director, the Golden Era of Hindi Film music was at its high-sun point. The ecosystem was extremely competitive with high-quality-but-very-popular individual styles of the music directors who had entered the scene in the late second half of the ‘40s./ early first half of ‘50s.R D Burman easily transformed himself from the understudy of his father, S D Burman, into an independent music director, by developing his own distinct style of compositions. Along with Laxmikant Pyarelal, he very effectively carried the baton form the second generation of music directors to the third generation.

Produced by Mehmood, the film revolved around a mentally under-developed character of Memood. The song epitomizes physically fully-grown-up, but mentally childlike personality of the lead male character, Choote Nawab – The Child Ruler.

R D Burman creates a very mature tune in the very first film. Along with all other playful songs, the present song and Lata Mangeshkar’s Ghar Aaja Ghir Aaye demonstrate the depth of versatility of R D Burman’s musical range. 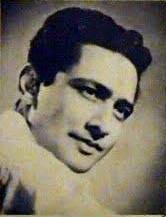 Mohammad Rafi is at his playful best in this lively song.

This should be background song.

Arun Raghavan is one of the 48 music directors who have composed only one Mohammad Rafi song. As he is a music director of South Indian films, this does not seem to be so stounding statement.

Like other South Indian film remakes in Hindi, Mohammad Rafi gets to sing a background song.

As has been now a well-formed pattern, Mohammad Rafi gets to sing this background song.

Known more as assistant to S N Tripathi, then Chitragupt and lastly as arranger to Laxmikant Pyarelal, Dilip Dholakiya took up D Dilip as his pen name when composing independent music in Hindi films. He also was a very accomplished singer. He did sing a few Hindi songs under S N Tripathi and Chitragupt. The only Hindi song that he has rendered under his own baton is Khanke Kangana Khan Khan Re, Chhanake Ghungharu Chhan Chhan Re  – Saugandh (1961) – with Lata Mangeshkar and Mohammad Rafi in the lead.

The song is a background song, filmed on Gemni Ganeshan on the screen.

As a special note on Dilip Dholakia – Mohammad Rafi, I succumb to the urge to record here a beautiful Gujarati solo song from this pair – Meethadi Nazrun Vaagi – Satyavan Savitri ,1963)

N.B. : All episodes for the year 2019 can be seen / downloaded as one file by clicking on Fading Memories..Unforgettable Songs – 2019

Welcome to August, 2017 edition of Carnival of Blogs on Golden Era of Hindi Film Music.

We have three posts for our present episode that befit the season:

Beyond ‘Maa Tujhe Salaam’, the film songs that dare to step out of line when things go off-key – Rather than pop patriotism tunes, it’s the songs about dissent and debate that resonate as India turns 70 – Rineeta Naik recalls the anti-nationals in Hindi films who stepped out of line and reminded us of the times when things went off-key… The songs presented here convey a poet’s despair over social and moral decay, the agony of a man unfairly marked as a traitor, and the exuberant cynicism of city-dwellers who discovered that “sone ki chidiya” rhymes nicely with malaria.

Celebrate the monsoon with this performance of raag Mia ki Malhar by Amir Khan – Malhar raags are prescribed for the rainy season. – Aneesh Pradhan – Amir Khan’s presentation of Mia ki Malhar, a raag considered to have been created by the 16th-century vocalist and composer Mia Tansen, has always been considered by musicians and aficionados as one of the most iconic interpretations of the raag. The recording featured here was made for the All India Radio National Programme of Music in 1958, but it continues to haunt listeners to this day.

Rainy Days has captured songs picturised in the rain, let it be for a part of the song or the entire length, from drizzle to showers! The song may not be about the rain itself.

We will first take up the posts on Meena Kumari in our regular anniversaries or eulogies posts:

We have chosen to take a Retrospective look to revisit:

‘No One Quite Like Her –  The Inimitable Meena Kumari’ – “Good looks, great talent and unhappiness. Perhaps no other star combined all three in such a heady brew as Meena Kumari did.” Sathya Saran writes about how the iconic actress carved out an inimitable niche for herself, had held sway over her audiences for two decades and continues to fascinate her fans to this day….. Nothing added as much to the legend of Meena Kumari as her liviing of it. For many it seemed the natural culmination to a life of suffering. To be abandoned and exploited, and left without money after earning  sums that were beyond the reach of lesser stars, and die sick in heart and body is a tale that cannot fail to touch anyone who hears it.

The Legend That Was Meena Kumari in which Antara Nanda Mondal poignantly notes that pain and anguish was part of her life and she brought them to the fore in her performances that became iconic.

Meena Kumari – Interview (1952). This is an interview when Meena Kumari was on the verge completing two significant and much talked-about films, “Footpath” and “Baiju Bawra”, in which she had played the feminine lead. 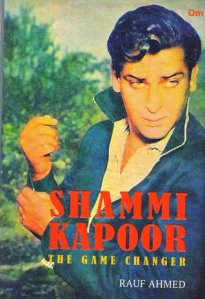 All these years later, nobody exudes flamboyance like Shammi Kapoor – On the Hindi film star’s death anniversary, a reminder of his irresistible exuberance. Akshay Manwani states that In his book on dancing star and rebel hero, Shammi Kapoor: The Game Changer, journalist and film critic Rauf Ahmed gives readers a view of Kapoor’s ascent into stardom.

70mm Man: C Mohan, who designed the logo for ‘Sholay’ and other classics – Ramesh Sippy’s landmark film was released this week 42 years ago. Its designer was one of the leading exponents of Bollywoood Expressionism.

And Happy Birthday to Another Big Reason I Got Drawn Into Hindi Films, that of Vyjayanthimala, who just happens to be celebrating her birthday as this post was in the writing. There is one more post on Vaijayantimala’s birthday – Seven Dances for Vyjayanthimala’s Birthday  – posted seven years ago. This post has video clips of some of her lesser known dance songs,

Of the Ten of my favourite Mumtaz songs, presented in celebration of the 70th birthday on 31sy July, I have picked up O matwaare saajna chhalak gaya mera pyaar (Faulad, 1963) as my own offering to the celebration.

The August 2017 episode of Fading Memories, Unforgettable Songs was dedicated to Shailendra and “Other” Music Directors

Here are posts on other subjects as well:

Gulzar’s 1988 movie ‘Libaas’ to be finally released later this year -Zee Classic and Amul Mohan, the son of the producer Vikas Mohan, will release the film.

Subodh Agrwal has taken up a very difficult subject of Asymmetric Duets. He has further tightened the rules by taking up the duets in which the rhythm and the tune do diverge and yet complement each other too. SoY readers have chipped in a very large number of such interesting songs.

We will end the present post with a chance Mohammad Rafi song that an e-mail from my friend Samir Dholakia presented me.

Note: In the song @4.28 a reference to other well-known songs – Akhiyan Sakhi Akhiyan Lagi and Ek Chatur Naar- is made as a parody

The song merited some more searches that led to a full-fledged parody song as well from the same film:

Not to be satisfied now, I search more, and get two beautiful duets with Suman Kalyanpur:

and a signature Rafi song

BTW, the music director S Madan is known to us for his far more famous and melodious duet with Asha Bhosle:

Batwara too had one signature Rafi song:

I trust you will always feel free to proffer your suggestions for making this series of posts more lively and informative….