To commemorate Mohammad Rafi’s anniversaries, [Born: 24 December, 1924// Death: 31 July, 1980] we commenced a series of articles on Mohammad Rafi that essentially tried to bring the solo song of Mohammad Rafi from the first film with the music dir 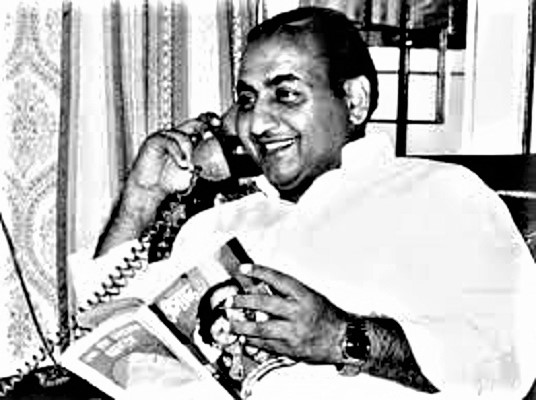 ector.  Beginning 2016, we have taken up one five-year slot every year, in the chronological order, starting from 1944, the year in which Mohammad Rafi sang his maiden solo song in Hindi Films. Till now we have covered

As has been noted by the musicologists and the Film Music historians identify three main stages for the first 25 years of a 50-years long active career. ‘40s was the period for Mohammad Rafi to create his space in the playback singing. The period of 50s was the period of consolidation and strengthening his position. He started getting varied song genres by almost all music directors and emerged as THE voice for many of the heroes of that period. One male playback singer who was displaced totally by the end of the ‘50s was Talat Mahmood. ‘60s was the period he was considered to adapt to racy compositions that was now becoming the order of the day. He was the automatic choice for the next generation heroes who came up on the scene in the early ‘60s.Mohammad Rafi developed customized theatrics for most of the heroes.

In the year ’69 Rajesh Khanna suddenly came out of his initial struggle period with Aradhana, 1969, (Music S D Burman, but virtually conducted by R D Burman because of SDB’s ill health) and Dushman, 1971 (Music- Laxmikant Pyarelal). R D Burman and Laxmikant Pyarelal were the new stars of the emerging, new, generation of the music directors, who had huge success in the use of Kishore Kumar as THE voice of Rajesh Khanna. As a result, Mohammad Rafi started losing his top position. He continued singing almost till the end and did have quite a few ‘good’ songs, history records this period as the period of the afterglow after the Sun has finally set for the day.

Moreover, as was observed in the first three years of the present 5th Six-Year Period, on one hand, the entry of new music directors who were to succeed in the years to come seemed to dry-up considerably. On the other hand, the music directors and the lead actors of the previous generation, who distinctly preferred Rafi, were distinctly seen ‘aging out’. It therefore makes all the more sense to complete the series of Mohammad Rafi’s First Solo Song With The Music Director with year 1969, as we take up the years 1967 to 1969.

The year 1967 has only music director Bhushan, who has his first ever Mohammad Rafi solo song. If I have been able to get all correct references, Bhushan seems to have only one more film – Purani Pahechan (1971) – subsequently.

We have here Mohammad Rafi that we usually hear in his NFS ghazals – playing with lyrics of mukhada differently every time, with deep emotions, sans all loudness even when he raises the scale a few notches.

Ved Shethi has only one Hindi film to his credit.

The song is background genre song, that describes the fate of the child protagonist. The lyrics for these songs usually convey the meaning for the song. Singer has to ensure that he /she remains faithful to that message.

Pamarthi Ashwatham belongs to those music directors who have rendered music for the films that were originally made in South Indian languages.

The film was directed by V Nagaiya. Nagaiya and Surya Kumari were in the lead roles. It had as many seven Mohammad Rafi solo songs, all Saint Kabir’s bhajans.

Ram Kadam was essentially a music director of Marathi films (113 films) who has also scored music for three Hind films and 1 Telugu film. We have two solo songs for his 1968 film Raaste Aur Manzil.

This is a poignant mood song. Rafi has done full justice to the mood.

Hindi films show the heroes resorting to heavy drinking to forget his sorrows. That always an ideal situation for a drunkard genre film.

S Kishan seems to have composed films earlier too, however all these B or C grade films never seem to have even faintly succeeded at the box office.

This is film which uses the folk themes – this time for the Tattar community of Mongolia. As can be expected, the composition has a strong influence of Mid-east music style.

Jimmy (James Singh), a Christian Sikh, from Ludhiana, had a long stint at Hindi films, but was not rewarded according to his merits. However, he has attained fame as the first music director  to have a ‘yodelling’ song – Ek Do Teen Char, Bagon Mein Aayi Hai Bahar – by Kishore Kumar (With Asha Bhosle, Muqqadar, 1950). Shrimatiji (1952) is his relatively more remembered film.

One more music director- Premanth– is also credited as (joint) music director for the film Tarzan In Fairyland.  However not much information is available about him

Hindi Cinema has all kinds of films made with Tarzan and King Kong. It seems Tarzan and King Kong also were infected with song-singing virus. The film Tarzan In Fairyland has one Mohammad Rafi solo – Ho Gaalon Pe Gulab Liye Nainon Mein Sharab Liye – probably composed by Premnath, for which I have not been able to find a digital version on the net.

It is really interesting that one music director who changed the course of Hindi Male Playback Singing history – though, officially, as assistant to S D Burman in Aradhana – has three solos and one duet for Rafi in Pyar Ka Mausam (Lyrics: Majrooh Sultanpuri, all of which have been filmed on the lead male actor, Shashi Kapoor. Of the three solos, Che Khush Nazare….Ke Khud Pukare Ke Hai Pyar Ki Manzil is a mandatory song wherein hero entices heroine by his happy-go-lucky mannerisms. Tum Bin Jaun KahaN had four versions in the film – two each by Kishore Kumar and Mohammad Rafi, each with a happy and sad shades version each respectively. The Kishore Kumar fans o one side and Mohammad Rafi fans on the other side were strongly divided then, as they may probably be divided today, as to which of the version is better delivered by the singer. Well, I have no intention to step into the quagmire of that discussion here. Rafi – Lata duet – Ni Sulatana Re – was the undisputed THE popular song of the films. The irony of the fate that is Hindi film music is that it was Pyar Ka Mausam that turned out to be launching pad that ser R D Burman to the outer orbit of success.

Narayan Dutt is again a music director about whom not much is known. The only notable feature that can be be note of the film ‘Pujarin’ is perhaps the only film wherein Rehana Sultan is not in her ill-famed ‘bold’ roles.

This is a background song, for the one of the extremely popular Hindi Film situations of Bride Farewell from her parental home after the marriage.

Both episodes of the 5th Six Year Period of Mohammad Rafi’s First solo with a Music director – 1964-1969 can be downloaded as one file by clicking on the link.

All six parts of the series Mohammad Rafi’s First Solo Song With The Music Director can be read / downloaded as one file by clicking on the hyperlink.