Hasrat Jaipuri (April 15, 1922 – September 17, 1999), born as Iqbal Husaain, recorded Jiya Beqaraar Hai as his first solo song for Hindi films for Barsat (1949). His second song (and first duet) was Chhor Gaye Baalam for the same film. Ever since, Hasrat Jaipuri, and for that matter his conjugate lyricist Shailendra, are considered inseparable element of the Shanker Jaikishan songs. 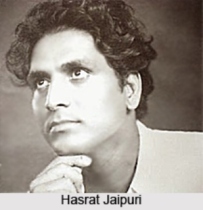 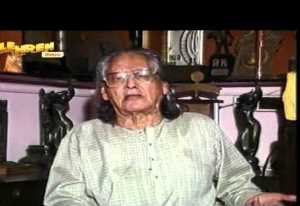 As our tribute to Hasrat Jaipuri, in the present episode, we will recollect his songs for other music directors. The period under our present consideration is from the beginning of his career till 1953. We will restrict ourselves to one song for each of the (other) music director in this period.

The first film is Wafa (1950). HJ has three songs in the film. Two songs are composed by Vinod and one by Bulo C Rani.

This song strongly establishes that HJ’s sensitivity seen in the lyrics of Barsat songs is not once in a blue mood affair.

In 1951, HJ’s filmography lists Bade Sahab for which Nisar had composed the music. As of now, our highly resourceful net-friends do not seem to have located the songs, so we do not have been to locate link to the digital version of the songs.

There is one more film, the unreleased one in 1951 – Imaan. The film had four songs from HJ – three solos by Asha Bhosle and one duet of Talat Mahmood-Asha Bhosle.

This should go down as the first film where Asha Bhosle has rendered HJ’s song. HJ’s songs in Asha Bhosle’s voice should in itself be an interesting subject to explore !

1951 also had HJ collaborating with Sajjad Hussain too.

This is almost a signature composition of Sajjad, in which HJ has maintained the mood by deploying not-so-complicated lyrics.

1951 has one more HJ film – Saudagar – for which Hanuman Prasad has composed two duets in G M Durrani- Asha Bhosle’s voice. Unfortunately I could not locate link to digital audio versions of the songs on net.

HJ has written one song for Anandmath (1952), a Filmisyan production of famous novel by Bankim Chandra Chatterjee.

The stage is set for the king to entertain himself and his English sahibs.

Annadata (1952) has five songs from HJ’s pen, of which digital versions of G M Durrani- Shamshad duet and a Rafi-Shamshad- Lata- Meena Mangeshkar chorus songs are not yet uploaded on net. Three solos of Lata Mangeshkar are available on YT.

Mohammad Shafi was considered to be a highly talented composer, who did not get the due favour from the lady luck of the commercial success. This song amply manifests Mohammad Shafi’s talents.

Badnaam (1952) had three songs to HJ’s account – two Lata solos and one Shankar Dasgupta solo. HJ has written songs for Basant Prakash for Nishan Danka and Saloni too in this year.

Hamari Duniya has three songs of HJ, one solo each of Lata Mangeshkar, Geeta Dutt and Rajkumari. Geeta Dutt song does not seem to be have been posted on YT.

Neelam Pari had 4 of HJ’s songs.

Both the songs are gems. So I would happily break the rule that we had set for ourselves and would most happily include the other song also as the penultimate song for our present episode.

We have few more films in 1953 for which HJ has written lyrics for music directors other than Shanker Jaikishan. But, that is for the future journey.

We will end our present episode with the HJ song composed by R C Boral: