While listening to the Songs of 1949, I had opportunity to listen to the solo songs of Surinder Kaur in great detail. I did get to listen to her duets with Mukesh, but as it appears, had missed the duet with Mohammad Rafi. The surreal appeal of her voice simply lingered on in my mind..  Hence, I sought more details. Cineplot.com and Wikipedia provide us fairly comprehensive details about her background. We come to know that this is the month of her birth (25th November, 1929).

And that made the choice for the content of our November, 2016 episode very simple – Solo Songs of Surinder Kaur from Hindi Films.

The list of songs that I could lay hands on span the period of 1948 to 1952 only. I have no idea how much these songs had become popular those days and why did she had to retreat to singing Punjabi songs only. Losing on more songs must surely mean a big enough loss to the wealth of Hindi Film music, but the songs that we already have are more than enough to make up the quantitative value.

I have chosen only one solo song per film here, and that choice is what my ears have liked. All other songs are available on YT, so those who wish to go beyond the ones here simply have to search for the film and the songs will appear easily enough.

This is the only solo song in the film and that has gone to Surinder Kaur. What a break that should be! And she has certainly lived up to the demands as well.

I have no idea whether Nao came first or it passed Nadiya Ke Paar first, but the as we cross Nadiya Ke Paar with the Nao, we get the bounty of three solos and a duet of Surinder Kaur.

The song is composed to the inherent Punjabi fair, but Surinder Kaur’s chords have certain appeal beyond the composition.

A dholak-based rhythm again, but Surinder Kaur comes in different colours in the delivery of the songs…

This can be called as perhaps her most ever-known song. Shaheed was certainly a film that by its very nature of the story was heavily tilted towards the character of the hero. Therefore, it was no small achievement that Kamini Kaushal had underplayed to the hilt her role of the beloved one who remains in the shadow, but comes out with equal theatrical score at the end. That makes the responsibility if the lead female playback singer quite daunting. That Surinder Kaur was chosen for all the three solos means that the music director had invested great trust in her voice. She has risen to the best of the vintage era playback standards.

The films had two other duets with Mukesh and one with Shamshad Begum. Surinder Kaur continues her standard that she had set in Shaheed.

Ghulam Haider reposes the faith and Surinder Kaur rises so well to the challenge in a song that exudes pathos.

For the purposes of records, HFGK mentions Khan Masatana as the music director for all songs of the film but one. For us it is to relish the sheer melody of Surinder Kaur’s voice in so lower octaves at a very slow spaced rhythm.

C Ramchandra also has chosen to allot one solo song to Surinder Kaur – Shamshad Begum has two other solos whereas Lalita Deulkar has one. Surinder Kaur so easily sounds like Shamshad Begum, with a heavier tone. Well, that is what it sounds to me. Whatever that may be, the song stands so well on its own merits too.

There are two more solos and a duet with Suraiya also to Surinder Kaur’s account in this film. She has played back for Madhubala in the film. In the present case, the song is set to a very soft style, befitting the mood of the scene in the film. Singing with the minimal support of the rhythm, Surinder Kaur succeeds in enacting the mood.

Gyan Dutt has not only given once again a lion’s share in the film’s songs, he seems to have gone to further experiment as well.  If this song is playful, listen to

Thandi Thandi Hawa Jo Aaye – a song so full of pathos and Surinder Kaur enlivening every possible nuance of the emotion.

The film has one more solo to Surinder Kaur’s account and a duet each with Mohammad Rafi and Geeta Roy respectively.

Heroine is physically so far away from her beloved that the she has no one to share the tears rolling down from eyes.…

For the records, Sabak has highest number of songs to Surinder Kaur in any one film – three solos, three duets with Mohammad Rafi and a chorus in duet with Asha Bhosle.

‘Shaadi Ki Raat’ (1950 has one duet with Talat Mahmood, which is so light in mood.

Here is a typical pre-marriage ceremony song where bride’s friends get together and tease her while playing satirical songs about her in-laws-to-be. Most of India has similar tradition, but Hindi films have standardized it to the traditional Punjabi culture. That is perhaps reason why Anil Biswas has chosen Surinder Kaur for the song.

For an essentially high-pitched-voice female singer, one obvious song form is a Mujhara. Surinder Kaur’s repertoire is, too, now complete.

To end, there is a very peculiar piece in Aandhiyan. Surinder Kaur’s voice has also been used for a male musician who has a feminine voice who is in the process of setting up the scale for the performance.

In order to end our episode with a Mohammad Rafi song, I have chosen the first film in which Mohammad Rafi and Surinder Kaur had a duet. The composition is set to quite lilting rhythm:

Surinder Kaur has had left behind a very rich legacy of her Punjabi songs also. 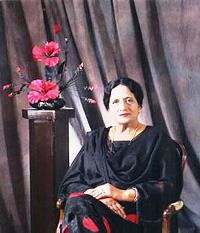 We pay our humble tribute to Surinder Kaur on her ensuing birth day by promising that we will come back to her duets at appropriate occasions.

If you have more songs to share, you are most heartily welcome…..

Ashokji,
This is a fabulous list. The link of ‘More nain bawre’ is of another song from the same movie, ‘Ambua ke led suhaane’, a triad song. This, too, is excellent.
AK

Thanks for pointing out the error of link.Since corrected.
Indeed grateful for your appreciation.