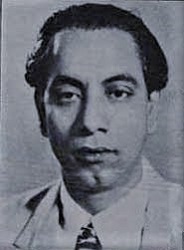 Ghulam Mohammed (1903 – 17 March 1968)’s musical scores during the years 1943 to 1949 had established his identity as percussionist who had also gift of composing melodies as well. He had already been successful with the scores of Pugree (1948) and Shair (1949). However, it seems that his concurrent role as assistant to Naushad perhaps had cast some kind of shadow over his own identity as independent music director. This relationship continued till film Aan) 1952. Some historians consider him too naïve a businessman since he continued to assist Naushad even he had getting success by 1948.

This theory seems to hold some merit, because Ghulam Mohammed did get three films in 1950, two in 1951 and three again in 1952. These numbers need to be viewed in the back drop of the fact that several other (so-called) already stablished) music directors were also scoring successful music for the then big production banners in the same period. 1950 had Naushad scoring music for ‘Dastan’ and ‘Babul’, C Ramchandra for ‘Sargam’ and Anil Biswas for ‘Arzoo’. In 1951, along with “Deedar’ of Naushad, S D Buraman’s ‘Bahaar’ and Baazi’, C Ramchandra’s ‘Albela, Anil Biswas’s ‘Taraana’ and Shanker Jaikishan’s “Aawara’ occupied the space. There was hardly any respite in 1952 as well, with Naushad’s  ‘Aan’ and ‘Baiju Bawra’, S D Burman’s Jaal and Shanker Jaikishan’s ‘Daag.’

In all the fairness to Ghulam Mohammed, it should also be noted that some other equally talented music directors also had not been able to break the glass ceiling, even if their music was also noted with high respect o their talent. For example, Bulo C Rani – Jogan (1950), Roshan – Hum Log (1951) and Anhonee (1952), Hemant Kumar – Anand Math (1951) and Madan Mohan – Ashiana (1952) to name a few representative cases.

As such, we have sidestepped some of his popular compositions for the present series and intentionally chosen songs that may be called as less heard ones so as to get a better appreciation of Ghulam Mohammed’s talent.

Previously, in 2021, we have covered Ghulam Mohamamed’s songs with different singers for the years 1943 to 1949.

With this backdrop to be kept at the back of our minds, we now take up Ghulam Mohammed’s songs for different playback singers during the years 1950 to 1952.

Here is an archetypical vintage era styled composition. However, the song succeeds in conveying the feelings of a girl who has fallen in love, for the first time. Majrooh Sultanpuri also has preferred to use very simple lyrics to truly express the feelings.

One noteworthy feature of Ghulam Mohammed’s  compositions was differently presented stanzas of his compositions, unlike many of his contemporaries who would not waste one more tune in one composition.

Ghulam Mohammed has boldly experimented with non-traditional orchestration for this street dance triad song, while maintaining the identity of the song genre with the use of catchy piece of harmonium in the brief prelude.

Comparison of the present composition with the previous one, Maine Sapna Jo Dekha Hai Raat, evidently demonstrates the vastness of range of tunes that Ghulam Mohammed can command to present almost similar feeling.

Since the song is not available on YT, here is an adio link: Hum Dil Hi Apna Haar Gaye.mp3

Here is song that eulogises passing away Mahatma Gandhi. Even he Ghulam Mohammed has very deftly experimented with change in tunes for different stanzas.

It may be noted that Rajkumari is singing along with Geeta Dutt in first part of the song.

Ghulam Mohammed comes all trump in a light-hearted comedy song. The icing on the cake is use of Amirbai Karnataki for such a song!

How imaginatively Ghulam Mohammed has used Mohammad Rafi’s voice for the opening line!

The influence of vintage era style on Ghulam Mohammed’s compositions, even during 1951, is evident in the way he has used Lata Mangeshkar’s voice in this song.

I so much regret that this is one Talat Mahmood song that I must have hardly got to hear earlier.

Asides: Shri Arunkumar Deshmukh informs that this was the film in which Amjad Khan has acted as a child artist.

This song indeed should tell us what effort Rafi must have put into create his own identity in his initial days as we find difficult to the way Rafi handles lower octave mukhada and high pitch opening of the first stanza or chips in with a cameo line in the second stanza.

In the stage dances, the dancers take up dress code of two cultures of two regions. Ghulam Mohammed has composed the tune matching to that culture. Especially noteworthy is the multi-instrument orchestra put to use by Ghulam Mohammed.

Unlike majority of Ghulam Mohammed compositions, here we have complex to sing tune, and that too for a song where the hero is trying to please the heroine!

I have selected this ‘masala’ dance song to validate the hypothesis – that Ghulam Mohammed has given Lata Mangeshkar the position of lead singer – put forward in the earlier song as soon as he has been entrusted the music for the film with the ‘hottest’ pair of the day – Nargis and Raj Kapoor.

Noteworthy is the change in the mood o the song that he has accomplished the way he has used Mohammad Rafi.

Ghulam Mohammed deploys vast orchestra during mukhada but then the stanza comes rendered with minimal instrumental support! This should easily rate as one of the best Mubarak Begum songs; however, the fact remains that, at least, I have heard it for the first time. So unfortunate that Mubarak Begum did not get many such high-quality singing opportunities!

What a pity that the failure of film at the box office also leads to the very short life of the songs, barring, of course, some exceptions!

Ghulam Mohammed sets the tone of happiness of the song by a very catchy prelude and then follows it up with composing the song in the effervescent singing mode.

Thanks to the technology and resourcefulness and the commitment of all the YT uploaders, we can recreate the mesmerising magic of Ghulam Mohammed’s compositions, even today, whether it did cast spell then or not!

We take a break here till the next episode so that we can absorb the nuances and range of present batch of Ghulam Mohammed’s compositions.

Ghulam Mohammed (1903 – 17 March 1968), born in the family of musician in Bikaner (Rajasthan), got his early training from his father, Nabi Baksh, a tabla player and a stage artist. The career of Ghulam Mohammed is littered with ironies of fate that did give him his credit for his creation, but a little too late and far too less.

Every single piece of article written on Ghulam Mohammed would invariably focus on at least one defining characteristic. And yet, the fact that Ghulam Mohammed got to compose music for just 37 films in a career spanning almost four decades does neither tells the full story of his caliber nor it does justice to his talent. As such, in the month of his death anniversary, we commence an annual series that relives his known and less known songs.

We will begin with an overview of Ghulam Mohammed’s career in the form of songs he has composed for different singers. The choice of singers does seem to be a function of the period in which the music for the film is composed. Every song that Ghulam Mohammed created songs with each of this singer had the perfect mix of the singer and of the music director. We have adopted a conscious choice of selecting the songs that can easily be classified as the ones receding from the memory.

Ghulam Mohammad got his first break as an independent music director in 1942 for a stunt film, Mera Khwab, released in 1943. However, some sources indicate Banke Sipaahi (1937) as Ghulam Mohammad’s debut film. There does not seem to be unanimity among film historians on this count. This was the period when he was known to be working as an instrumentalist for music directors like Rafiq Ghazanvi, Irshad Ali, Anil Biswas etc. It is further recorded that his first major break that elevated him to the status of assistant was in Sharda (1942; Music: Naushad). Their this relationship lasted till Aan (1953) even after Ghulam Mohammad had charted his own independent course in the meantime. Naushad also paid his tribute to their relationship by completing the unfinished tasks of Ghulam Mohammad swan song film ‘Pakeeza’

The film had four music directors – Bal Mukund, Geeta Varma, Shankar Rao Vyas, Ghulam Miyan, Reejram – to compose as many as 16 songs. HFGK has been able to identify only a few songs for their respective composers. Even as we get to read the name is Ghulam MIyan, Cinemaazi confirms that this song is indeed composed by Ghulam Mohammed.

The song has very prominent and distinct use of dholak as rhythm instrument.

The song is set to what is popularly known as Ghoda songs 9 singer rides a horse or a horse driven cart on the screen). The song is set to a fast pace, but runs on a very low octave, indicating that protagonist is deep thoughts as he sings the song during the ride.

The song uses a duff (sometimes spelt as ‘daf’, too), another rhythm instrument that Ghulam Mohammed is credited with popularizing in Hindi film songs.

Composed to a softer, but relatively a fast, ‘qawwali’ style, and set to a soft Mohammad Rafi rendition, this easily the forgotten preceding song with the initial lyrics – Nigahein Milane Ko Jee Chata Hai. Yes, the one with better recall value is one which was used in Asha Bhosle qawwali song by Roshan (Dil Hi To Hai, 1963 – Lyrics: Sahir Ludhyanavi)

The orchestration has strong resemblance to what is used in Naushad’s songs. However, this playful song is well-remembered by Suraiya fans.

Songs of ‘Pugree’ were resounding success in those days.

So ever young Shashikala lip-syncs Shamshad Begum on the screen.

‘Shair’ was also quite popular album, in the year wherein blockbusters like Andaz or Barsaat or Mahal would have occupied the memory space of the listeners.

It should be interesting to note that G M Durrani is preferred as a playback voice to the male lead, Dev Anand.

Even as I had planned to take up film-wise song later in this series, it would be opportune to listen to two other duets from Shair, for the use of different percussion instruments.

Ghulam Mohammed has used ‘matka’ (an earthen clay pot) in this song. Matka was another percussion instrument that is credited to Ghulam Mohammed for being popularly used in Hindi film song.

Playback voice now shifts to Mukesh, possibly because the of the pathos mood of the song

This duet was also a chart buster of those days.

Since my knowledge of music, and as a natural corollary, that of music instruments, is abysmally limited, I could only recognize a different instrument is used here, possibly a mix of dholak and matka, but do not which one it is!

One interesting, and equally very rare as well, trivia to be observed is that Cuckoo is in the spectator’s gallery and enjoying the dance on the stage.

I plan to take up a few more singers in the next episode, before switching over to the usual format of remembering the songs from different films in chronological order.

We will continue remembering Unforgettable Songs that seem to Fading away from our Memories every second Sunday of the month next year too……..